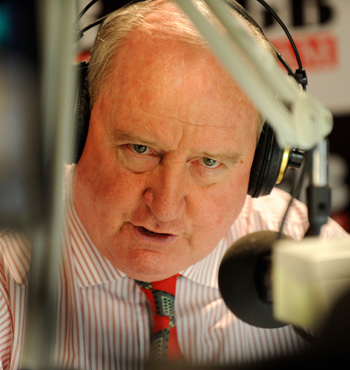 If you think NSW is run by elected leaders, think ago. In Emerald City it is Alan Jones calling the shots. Photo: AAP

It hurts my pride, but I have to apologise to Alan Jones.

I’m sorry, Alan, I was wrong, you do run New South Wales. Such is the weak-kneed nature of our miserable excuses for local politicians, your bullying, hectoring, bombastic, crude, condescending, uncivilised, screeching, occasionally racist, more than occasionally sexist, sometimes defamatory and somewhat demented ranting and grandstanding before a relatively small and ageing radio audience delivers you power beyond all comprehension.

The apology is necessary because in the wake of his appalling and now- infamous bullying of the Sydney Opera House CEO on Friday, I tweeted, “Anyone going to break it to Alan that he’s not actually in charge of the city, state or nation? Increasingly strange.”

Twitter lit up, went viral, as they say. The reaction to the gang tackle by Jones and Racing New South Wales on the Opera House’s Louise Herron seemed greater than that which greets a change of prime ministership these days.

As more people listened to the attack (2GB and Racing NSW actually promoted their performance), the more the  outrage grew over the insulting and rude behaviour a couple of men who wanted to promote a horse race on the sails of the Sydney Opera House.

Such was the disgusting nature of the “interview”, the supposed issue of the horse race promotion became irrelevant. It was possible to be in favour of the gee-gees but revolted by the behaviour.

Civilised human being after civilised human being wondered how Fairfax – publishers of the Sydney Morning Herald, The Age, Australian Financial Review et al – could tolerate owning such a show. At least the answer to that question is obvious: Fairfax is desperate for the advertising dollars, despite the cost of defamation payouts. (Fairfax is majority shareholder in Macquarie Radio, owner of 2GB.)

It is now part of the Emerald City’s tawdry history that any semblance of NSW government intestinal fortitude didn’t last till sundown. Premier Gladys Berejiklian meekly rolled over, capitulated to the bullying and gave Jones what he wanted, overruling the Opera House’s standards on what and how the heritage-listed building can be used for promotion.

Hence, my apology. Not for the first time, Jones managed to pull Macquarie Street’s strings when acting in concert with Rupert Murdoch’s Daily Telegraph rag.

That didn’t surprise everyone. Imre Salusinszky, former media director for Mike Baird when he was Premier, explained on Twitter:

You have to understand Macquarie St. It’s a bubble, worse than Canberra. All day MPs, Ministers, staff, are babbling about what Jones and Hadley are demanding. They don’t understand how low this ranks in the priorites of those who elect them. And yes, this is electorally risky. https://t.co/xieaj92PkV

That was after remarking:

“Jones and the Tele are in racing up to their elbows and never saw a conflict of interest they didn’t want to exploit.

“When Jones interviewed Mike Baird before the 2015 election he spent most of the time ranting about the fringe issue of “parity” between NSW and Vic racing taxes.”

Mr Salusinszky has explained the ridiculous 2GB hold over politicians before, just as Jones and friends have bent politicians to their will over racing of one sort or another before.

In a Fairfax media article last year, he recounted the sorry saga of Mike Baird’s backdown on greyhound racing. On that occasion, it was Jones’ 2GB stablemate, Ray Hadley, leading the charge, but they were in the business of retailing misleading information together.

Such is the Jones ego that he deigns to order federal politicians around as well, calling them to demand the sacking of Malcolm Turnbull as Prime Minister, his contribution to the Murdoch/shock jock attack on Turnbull.

How does he get away with it? A lack of spine on both sides of politics.

Labor’s NSW leader, Luke Foley, also dances to the Jones tune. It suits him as Opposition Leader to be attacking the government, but, should he win in March, he can be relied upon to discover the cost of being a Jones servant.

It certainly makes no sense to this. The old shock jock’s apparent influence is out of all proportion to his audience. In a city of five million people, on any one morning only a hundred thousand or so poor souls have 2GB on when Jones is blabbering.

But, as Mr Salusinszky as written, the conditions in which tabloid media and politics operate in NSW are unique – and not in a healthy way. The rest of the country should be glad.

So I should not have been surprised by Gladys Berejiklian’s surrender, by her throwing her Opera House CEO under the 2GB and Telegraph garbage truck. That’s the Rum State for you.

What remains the biggest disconnect for me though is the continent-wide gap between the image Alan Jones apparently has of himself and how he behaved on radio on Friday morning.

Jones, the monarchist, the valet-employer with shuttered bookshelves, the person who would claim to value manners and “good form”, old chap, was, most of all, utterly uncivilised.

That works just fine in Sydney.

My apologies, Alan Jones – you really do run NSW