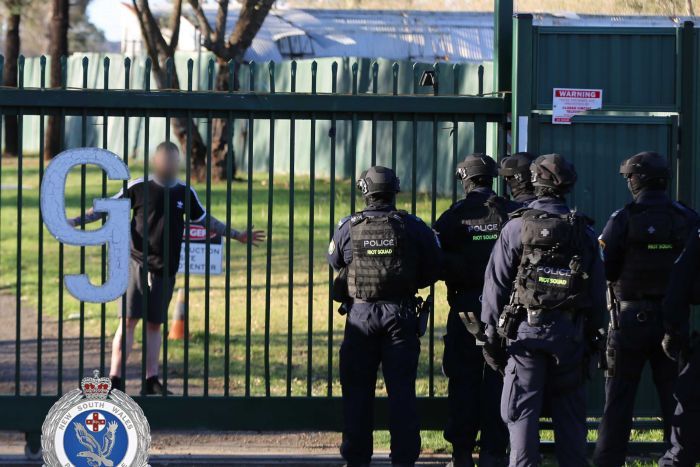 The man fronts up to the riot squad at the Gypsy Joker clubhouse. Photo: NSW Police

A bikie who was involved in a stand-off with police in Sydney’s west on Tuesday will face court after allegedly tying his ex-girfriend to a pole and assaulting her for several days.

The 22-year-old woman was walking along Cam Street at Cambridge Park on Sunday, when the 29-year-old man driving a Ford Mustang allegedly forced her into the car.

Police say she was then taken to the Gypsy Joker Bikie Gang clubhouse at Horsley Park where she was allegedly assaulted.

After two days, the woman managed to escape, but was allegedly re-captured by the man who then drove to Penrith on Tuesday afternoon.

It is alleged that when the man left the car, the woman managed to escape again, running to a nearby property and contacting police.

The woman spoke to police before being taken to Nepean Hospital in a stable condition.

Police went to the clubhouse to arrest the man but he fled inside the property, leading to a two-hour standoff with officers from the Fairfield Police Area Command, Traffic and Highway Patrol Command, the Public Order and Riot Squad and further specialist police.

The man was later arrested and taken to Fairfield Police Station where he was charged with kidnapping and domestic violence offences.

He is due to face Fairfield Local Court on Wednesday.