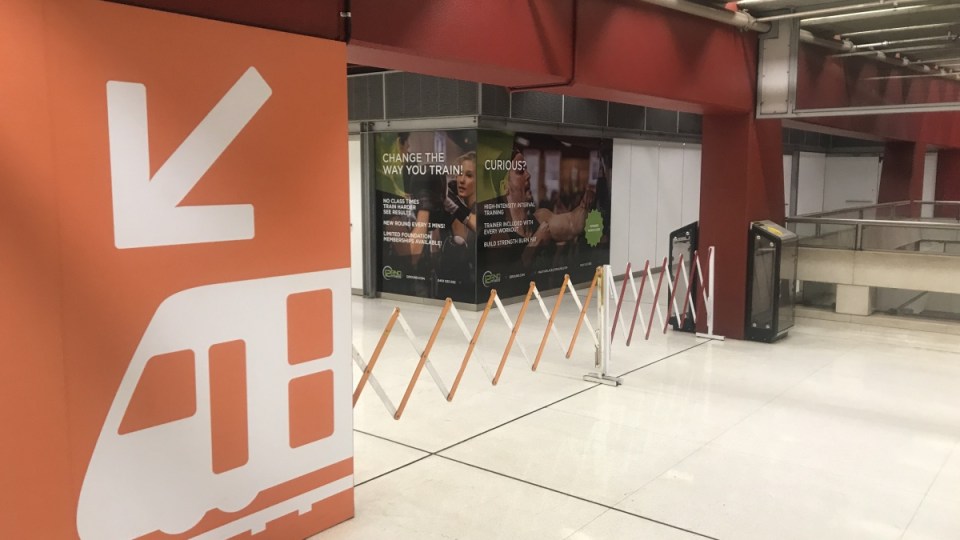 The space at Martin Place railway station in Sydney CBD has been leased for a gym since March. Photo: James Coffey
exclusive

Sydney Trains is in a bitter legal dispute with Martin Place railway station tenants over a gym planned for the state-owned space, The New Daily can reveal.

James Coffey and Charles Estephen – together, Round Two – say “broken” department bureaucracy has almost bankrupted them after signing a five-year lease to open a gym under the 12RND fitness franchise.

Fit-out renovations in the 166-square-metre space started in March but were halted midway through, and Mr Coffey estimates their losses are running towards $500,000.

The lease is now the subject of a damages claim and counter claim in the NSW Civil and Administrative Tribunal (NCAT).

“We are being held hostage by a broken bureaucratic process,” Mr Coffey told The New Daily.

The valuable public asset is worth tens of thousands in rent, and the dispute means taxpayers might not see a cent.

Sydney Trains and CI Australia did not respond to queries on how long the space was vacant before March.

“Earlier in the year, RailCorp issued a stop work notice in respect to fit out works being undertaken by Round Two NSW Pty Ltd at a retail tenancy at Martin Place,” a Sydney Trains spokesperson said.

“As this is now subject to legal proceedings, it would be inappropriate to make any further comment at this point.”

Mr Coffey insists they adhered to all construction approval requirements disclosed by RailCorp and its appointed leasing agents at CI Australia.

He estimates their total losses are in the order of $450,000 – including legal bills, loss of staff, renovations, consultants and planning.

RailCorp is arguing the agreement is not a retail lease in order to take it out of the tribunal’s jurisdiction and into the District Court.

Mr Coffey says the argument raised by the government agency has the potential to “exhaust our resources before our case can be heard, doubling not only our legal costs but also the taxpayer’s”.

The tenants offered a walk-away settlement suggesting they all eat their costs, saying they did not have the stomach or resources to continue.

RailCorp would only agree to settlement involving significant payments to RailCorp, the tenants say. They are expected to reject that offer.

Sydney Trains would not tell The New Daily how much had been spent on the legal fight.

Lawyers acting for the government declined to comment while proceedings continue. Leasing agency CI Australia did not respond.

Round Two obtained a construction development certificate (CDC) with owner’s consent from RailCorp, seen by The New Daily.

The leasing agent then organised a site induction, which is listed as the final step before construction in the tenancy fit-out guide the tenants were using, dated July 2015.

“All approvals have been sort [sic] for the fit out to commence,” CI Australia said in an email to Mr Coffey and department station staff while organising the induction.

The fit-out then began on March 20 and was expected to last three to four weeks.

Part way through – when the tenants sought to have power shut off for more construction – Sydney Trains said its Configuration Change Board (CCB) had not approved the works and issued a stop work notice.

Mr Coffey insists the CCB process had never previously been mentioned. It is not referenced in the lease, disclosure statement or 2015 fit-out guide – all seen by The New Daily.

A fit-out guide dated May this year on the CI Australia website does account for the CCB.

The tenants sought assistance from the tribunal and had two mediations before filing their claim on June 20.

They accuse RailCorp of misleading and deceptive conduct, unconscionable conduct, and allege the agency engaged in unfair tactics.

“The documents were misleading, incomplete and to the extent that information was provided, were so complex as to be unusable,” the tenants allege in the points of claim.

It’s also claimed the government agency took two months between shutting down the site and supplying a list of defects in the fit-out, failing to act in good faith.

In documents seen by The New Daily, a surveyor hired by RailCorp estimated it would cost more than $638,000 to get the space back to its ‘base’ condition, including $200,000 for paint removal.

The underground station is heritage protected, but some exemptions were granted.

Transport Minister Andrew Constance on Wednesday announced details of the $378.6 million Martin Place Metro development, which will not affect the current heavy rail station or its tenants.

Mr Coffey and Mr Estephen have also been running another 12RND gym at Bondi Junction for two years.