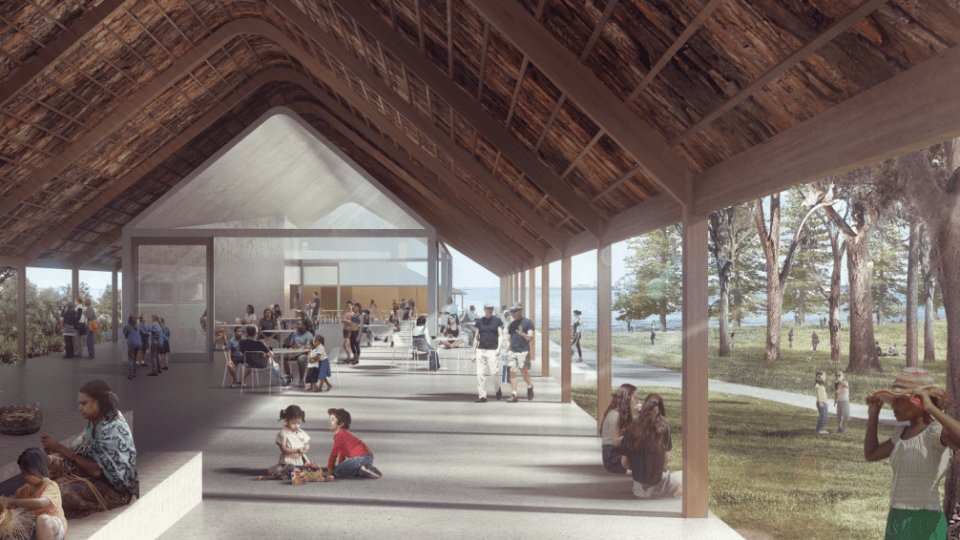 An artist's impression of the cafe pavilion is pictured. Photo: NSW Office of Environment and Heritage

A proposed memorial to Captain James Cook at his Botany Bay landing site has been interpreted by some as a celebration of colonisation.

But traditional owners at the La Perouse Aboriginal Land Council have backed the overall project to redevelop the Kurnell site, with $50 million in federal and NSW state funding.

Chairperson of the Land Council, Noeleen Timbery, said the word ‘statue’ was “inflammatory”, but the redevelopment was about so much more than the planned aquatic monument to Captain Cook and his ship, the HMS Endeavour.

The year 2020 will be the 250th anniversary of Captain Cook’s landing at what’s now known as the Meeting Place Precinct, where he had his first encounter with Aboriginal peoples on April 29, 1770, in the “meeting of two cultures”.

Plans for the redevelopment come at a time of heightened debate about the value of statues of historical figures, especially those connected to colonisation.

Statues of Captain Cook and NSW governor Lachlan Macquarie at Sydney’s Hyde Park were graffitied with the words “no pride in genocide” and “change the date” in August last year.

Ms Timbery told The New Daily the larger concept of the Kurnell redevelopment was still in draft form.

“You really have to look at the full master plan, as a total, and a design for a statue hasn’t really been formalised yet,” she said.

“For us it’s broader than the Cook statue. We’re not really talking in those terms. We’re talking in the broader concept of the whole installation and what that means to the people.

“Using the word statue is kind of inflammatory, anyway, so it’s going to get people worked up.”

The Aboriginal Land Council has participated in the consultation process.

Ms Timbery said her biggest hope was for “truth” in the way history is told. She added it was important for the local community and local people to benefit from the site going forward.

“The other thing we’re really hoping, the outcome that we’re hoping for is that our community and our people get to share in cultural and economic benefits that this will bring.”

The Land Council hopes to ensure the design acknowledges and represents the survival of local people and culture, Ms Timbery said.

“There are many families within the La Perouse area that are descended from the traditional people that would have lined the coastline around Botany Bay when Cook first sailed in that bay,” she said.

A joint statement said a panel, comprising local community and indigenous representatives to oversee decisions on the new monument, will be appointed.

“The consultation process will include public display of monument options for direct feedback from the community with the panel to recommend a preferred option to the state and commonwealth government,” the statement said.

A draft master plan for the precinct was released on Saturday.

“The concept of a Meeting Place is still relevant today: it is a place where cultures met and continue to meet and where conflict and reconciliation, celebration and sorry business can be acknowledged in the one landscape,” the master plan said.

“It is expected that the master plan will create opportunities for Aboriginal organisations and businesses in the areas of tourism, landscape management, hospitality and education.

“Design cannot heal the impact of 250 years of occupation, but it can provide a platform for diverse cultures, readings and dialogue.”