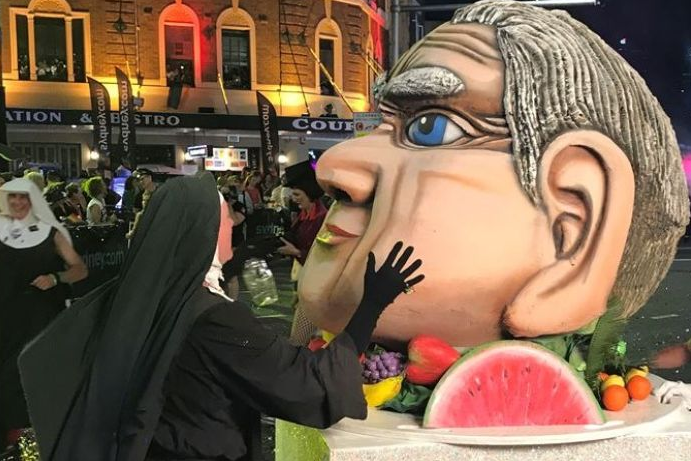 From a night of police brutality when homosexuality was illegal, to Saturday night when two men legally married on the glittering Oxford Street strip — Mardi Gras has changed a lot in 40 years.

It is the night of nights for the Australian LGBT community but this year is particularly fabulous as it marks four decades since the original 1978 march-turned-protest.

And after Australia said ‘Yes’, what better way to mark how far society has come than with the parade’s first wedding?

James Brechney and his partner Stuart Henshall tied the knot in the most fabulous way they could think of — standing on a giant wedding cake.

They timed their ‘I Dos’ right as their float crossed Taylor Square, where the original Sydney Rainbow Crossing was.

“Stuart and I understand the shoulders we stand on to be able to get married at this year’s Mardi Gras,” Mr Brechney said.

The parade had an undeniable air of marital bliss, and was dotted with many other couples who were either just about to get hitched or had already done so.

Revellers said this Mardi Gras felt “completely different” to all other years and “equality is in the air”.

“We can get married and there’s nothing they can do!” one marcher yelled.

Hopes that Cher would perform at the parade were granted when the popstar performed her hits including Believe and Strong Enough.

The LGBTI icon met with Prime Minister Malcolm Turnbull in front of gushing fans and later tweeted that she spoke with him about “how I detest [US President] Trump”.

She also pledged that although “I get he’s centre-right, I’ll work on the centre part”.

However, as Cher fever swept through the parade, the awning of Oxford Street pizza shop Hello Pizza partially collapsed on passers-by, injuring one woman who was taken to hospital with minor injuries.

On top of celebrating marital bliss for all, the parade had a recurring theme of poking fun at Australian conservative politicians including Pauline Hanson, Bob Katter, Fred Nile and Cory Bernardi.

One float served up huge Hanson and Nile heads on dinner plates and another poked fun at Mr Bernardi’s same-sex marriage “slippery slope worst nightmare” by acting out bestiality, marriage between family members and marrying inanimate objects like the Sydney Harbour Bridge.

The 78ers, who reunited from across Australia to march on Saturday night, have since been praised as a valiant group who showed incredible bravery on that cold, terrifying night of police brutality.

Thanks to those men and women, by April 1979, the Parliament of New South Wales repealed legislation that had allowed the arrests to be made and created a new Public Assemblies Act which meant Sydneysiders no longer had to apply for a permit to have a demonstration.

The first Mardi Gras was hence a major civil rights milestone as well as the beginning of an iconic celebration of self-expression.

Diane Minnis, a 78er, was joined by 100 fellow marchers from that night atop a bus at the front of the parade this evening.

“It will be a good night … then the bus will take us home to Central so we can get home at a reasonable hour,” she said.

“Not many of us are into partying these days.”

NSW Police have since issued an official apology for the actions officers 40 years ago.

“I think it is important that we recognise when we get things wrong. The NSW Police got it wrong in 1978,” NSW Police Assistant Commissioner Tony Crandell said.

Mr Turnbull and wife Lucy marched through the parade route before it kicked off, with the PM telling the crowd that Mardi Gras’ milestone coincided with one of his own.

He said this edition of the parade carried extra gravity in the wake of last year’s same-sex marriage vote.

“This is a huge affirmation of respect and love. It is so worth it. The vote gave same-sex couples a huge hug,” he said.

Mardi Gras blows out its 40 candles with gales of love, glitter and gay pride