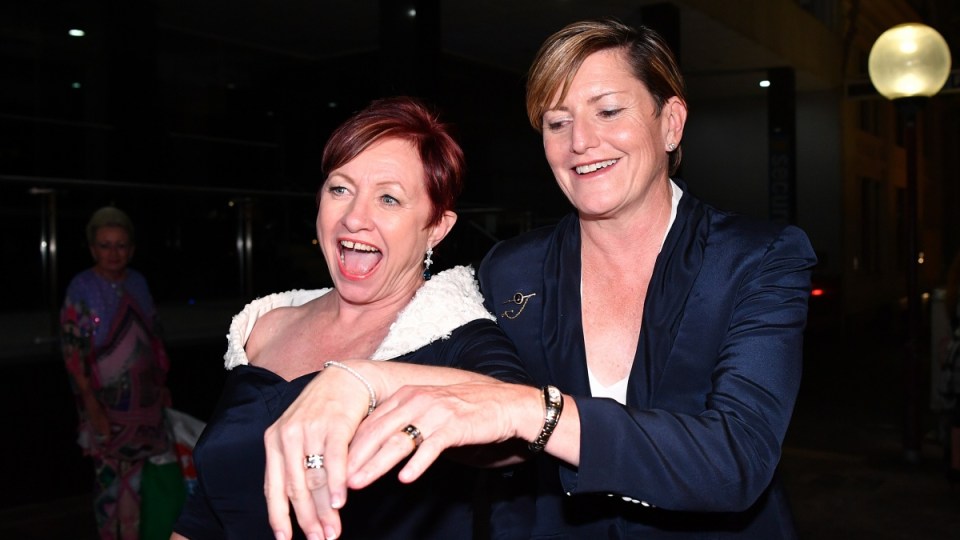 Virginia Flitcroft and Christine Forster were reportedly up for some karaoke and DJ mixes at the after party. Photo: AAP

Arriving just before the CBD ceremony on Friday afternoon to see his sister Christine Forster marry her long-time partner Virginia Edwards (who will revert to her maiden name Flitcroft), Mr Abbott told reporters he was looking forward to “having a new sister-in-law”.

He said he was “very happy” for the couple, who had been together for 10 years and engaged for the past four, declaring it a “great family occasion” in front of 190 guests in a location just off Macquarie Street.

Ms Forster and Ms Edwards, two of the most outspoken marriage equality advocates during Australia’s postal survey on the issue last year, both said they were “very excited” to be tying the knot, adding “it’s been a long time coming”.

Speaking on The Project just before the ceremony, embracing and holding hands, they said they had written their own vows and had to pinch themselves that they were finally able to get married under Australian law.

“In some ways I am still pinching myself about this because it was such a long time coming and it was a very long and hard fight for marriage equality but Australia stood up and spoke loudly and proudly.

Dressed in matching navy outfits, the happy couple walked down the aisle holding hands in front of Mr Abbott and other family and friends.

“I now declare you partners, soul mates and lovers for life – married,” the celebrant announced to cheers before heading off to the city’s Botanic Gardens for photographs and a reception.

Mr Abbott’s daughter Frances, who was also a strong supporter of same-sex marriage during 2017’s postal survey, wasn’t able to attend but posted on Instagram about the wedding.

“Sending love to Chris and Virg on their big day,” she wrote. 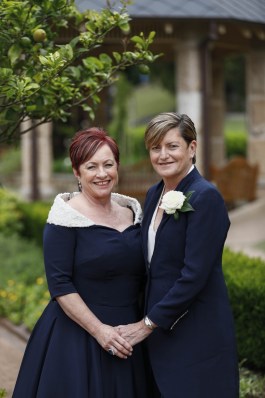 Ms Forster, a City of Sydney councillor, played a prominent role in the campaign for gay marriage which was legalised after 62 per cent of participants in a national postal survey backed the move in mid-November.

Fairfax Media reported the ceremony was “simple and solemn” with Australia’s Got Talent runner-up Greg Gould performing an original song ‘All I knew I wanted’.  Comedian and cabaret singer Bob Downe sang at the reception.

Ms Forster, revealing last year in a Fairfax Media interview that she would sing at her wedding, reportedly joined female impersonator Gayna Tension to sing ‘Get Happy’ and ‘Happy Days Are Here Again’.

In the September 2017 interview, Ms Forster said her brother Tony was among the first people she told she was in a same-sex relationship and that her first marriage was over.

“Tony was shocked but his reaction was very much, ‘Essentially, Chris, life throws up a lot of unexpected situations and I know that you will be trying to do your best. Anything I can do to help you through it, I’ll do’,” Ms Forster said at the time.

In the same interview, Ms Edwards spoke of her love for Christine and her “sense of fun”.

“I love Christine’s sense of fun. She is the only person I know who puts her hands on her belly and just throws her head back and laughs. She will try anything. Eat anything. Sing karaoke at the Stonewall hotel. She’s incredibly kind.

“I would struggle to find anything meaningful that I would change about her,” she said at the time.

At Friday’s wedding, there were no official duties for the former prime minister. Among the first to call Ms Forster earlier in the day to wish her well, Mr Abbott was all smiles and celebrating alongside his wife Margie and his mother Fay.

“The Abbott family is, fortunately or unfortunately, full of gregarious people who like public speaking, so any number of them could jump up and speak on a whim,” Ms Forster said just prior to the ceremony.

Ms Forster confirmed to The Project that Mr Abbott’s only role at the wedding would be that of “older brother” and that he was “really looking forward to it”.