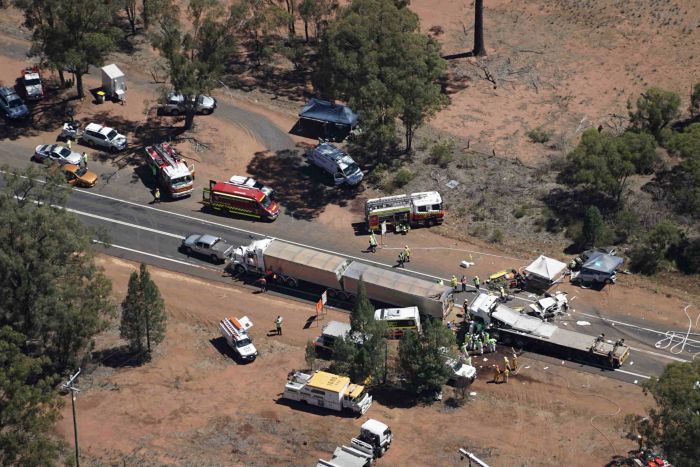 More than 600 trucks have been raided in NSW after 48-hours of carnage on the roads. Photo: ABC News

Hundreds of trucks have been raided by New South Wales police in a surprise crackdown on “cowboy” drivers and “ratbag” operators.

More than 600 trucks were inspected on Thursday in one of Australia’s largest ever heavy vehicle compliance operations.

The operation comes in direct response to a spate of fatal crashes over 48 hours in mid-January that claimed five lives on the state’s roads.

NSW Police said truck drivers were being overworked and suffered fatigue, in some cases being made to take amphetamines in order to stay awake.

The Transport Workers Union welcomed the operation, but accused the government of punishing drivers, rather than “corporate boardrooms”, with “bandaid solutions”.

“Today we executed it; we kept it under wraps and at 6am we started pulling up trucks,” Mr Corboy said on Thursday.

“Some people get into the trucking industry because they think they can make a quick buck, they push their drivers too hard, they run poor companies, they don’t keep fatigue records and they’re just in it for the money.

“They’re making their drivers drive fatigued, in some cases making them take amphetamines to stay awake, which is a complete recipe for disaster.”

The 24-hour operation carried out in conjunction with officers from Victoria, Queensland, the ACT and South Australia, aims to check every truck and heavy vehicle travelling in, through and out of NSW.

More than 450 police and vehicle inspectors from NSW Roads and Maritime Services (RMS) were involved.

“If you’ve got a truck company that cuts corners, doesn’t look after drivers and doesn’t have safety at the heart, we’re going to get you,” Mr Corboy said.

Aim is to eradicate ‘cowboys’ from the industry

RMS director of compliance Roger Weeks said the companies and drivers that acted responsibly wanted to “get rid of the cowboys”.

“They want the ratbag element out of their industry because they know it’s those folk who are giving their whole industry a bad name, so that’s who’s in our sights,” Mr Weeks told AAP.

The Transport Workers Union lashed the state government for continuing to “sit on its hands when it comes to implementing crucial, state-based policy”.

TWU NSW Secretary Richard Olsen said truck drivers worked “under immense pressure with no option but to keep moving, while those forcing them to do this suffer no consequences”.

“To protect truck drivers and all road users, we need strong policy that actually reaches the corporate boardrooms where decisions are made,” he said in a statement on Thursday.

As long as the NSW government continues to treat only the symptoms while ignoring the cause, truck related deaths on our roads will continue.”

On January 15, a truck driver was killed and another was injured in a fiery crash south of Newcastle involving three heavy vehicles.

Hours later, two men died after their trucks were involved in a head-on collision near Grafton.

The following day, a young couple, both aged 19, were killed when a semi-trailer ploughed into cars stopped at roadworks on the Newell Highway near Dubbo.

In the year to September 2017, the number of people killed in truck crashes on NSW roads jumped 86 per cent.

About 40 per cent of employers agreed the workplace did not suit those overly concerned about being injured.

It found 42 per cent of owner-drivers said the reason they did not report safety breaches is because they believed they would be sacked.

Roads Minister Melinda Pavey did not respond to a request for comment.