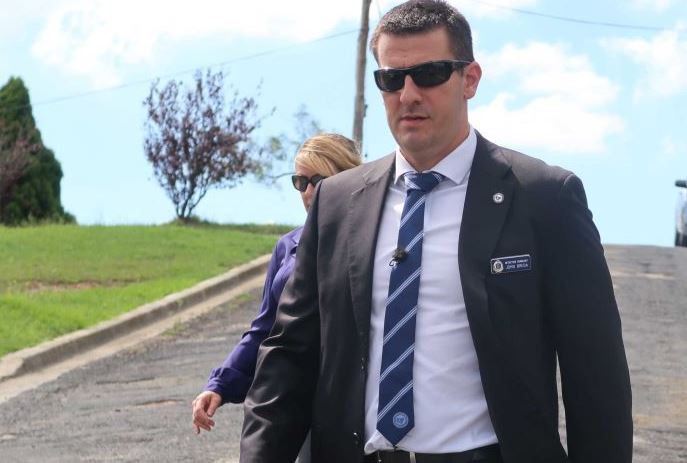 Detective Sergeant John Breda isn't out of the woods yet, but doctors are pleased with his progress. ABC: Alex McDonald

The senior NSW detective twice stabbed by an accused sex offender in a Sydney pub on Friday remains in a serious but stable condition in hospital.

Detective Sergeant John Breda was stabbed in the chest and abdomen in the beer garden of the busy Maroubra Junction Hotel on Australia Day afternoon while trying to arrest 33-year-old Nick Newman who had been the subject of a court-issued warrant.

Police say Det Sgt Breda was stabbed during a “confrontation” and Newman was shot dead by two other officers who had gone with him to the pub.

The 45-year-old detective was taken to St Vincent’s Hospital in a critical condition and underwent emergency surgery.

Acting NSW Police Commissioner Dave Hudson and Police Minister Troy Grant visited the hospital on Saturday and were briefed on his condition.

The doctors “are comfortable with his progress so far, however he is by no means out of danger,” Mr Hudson said.

Mr Grant drove to Sydney from Dubbo overnight after hearing about the incident.

“It’s the worst phone call a minister can get to hear one of NSW’s finest has been injured so severely with his life at threat,” he said.

The day before the stabbing, police issued a public appeal for information on Newman’s whereabouts.

He was scheduled to appear in Penrith Local Court on Wednesday but failed to show.

Labor victory fires up Tamil family’s hopes of return to their Biloela home
Analyst: Sharemarket will be anxious about a Labor pact with Greens
French foreign minister hails defeat of Morrison and his ‘notorious incompetence’
Tiger Woods quits PGA tournament after the worst round of his career
COVID claims 18 more lives as nationwide daily cases soar above 35,000
Volodymyr Zelensky: How war will end as Ukraine ‘breaks backbone’ of Russian army
‘Dedicated’ NSW detective John Breda in serious condition after Maroubra stabbing
Today's Stories