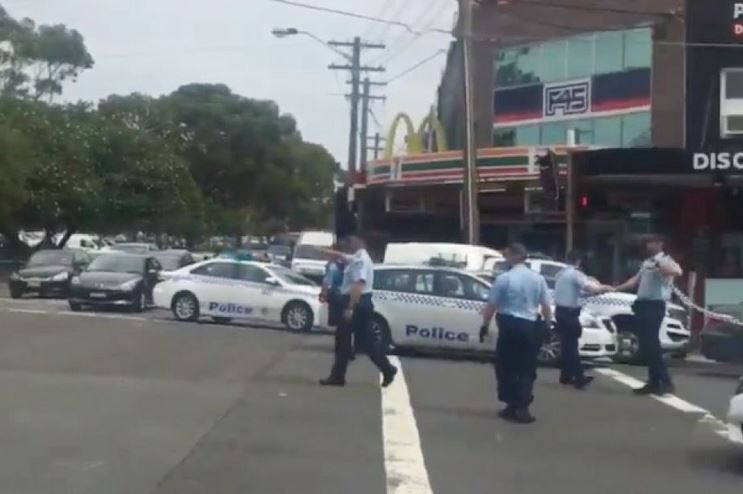 Police converge on Maroubra after the officer was stabbed and his assailant shot dead. Twitter: @HamiFaraj

The veteran police officer stabbed by an alleged sex offender during a violent confrontation in Sydney’s east is a “dedicated” detective who is passionate about helping abused children, colleagues say.

The 45-year-old officer suffered internal abdominal injuries and a laceration to his liver and was taken to St Vincents Hospital in a critical condition.

He had surgery for his injuries on Friday night and remains in a serious but stable condition.

The ABC’s 7.30 was given special access to the NSW Child Abuse Squad to see how the unit deals with the trauma inflicted on children, families and police working on the cases.

Detective Superintendent John Kerlatec told the ABC Detective Sergeant Breda was “an exceptionally dedicated and experienced senior investigator who has committed his career to keeping the community safe”.

“In his time in his current role within the Child Abuse and Sex Crimes Squad, he has investigated numerous incidents of child abuse and serious neglect,” he said.

“His family are being supported by friends and work family at this time.”

He has previously worked in the Property Crime Squad and the Middle Eastern Organised Crime Squad but he told the ABC his work in the CASC squad was unique and rewarding.

“You can’t share some of the things that we see with people,” he said.

“It’s just the way it is unfortunately, because you don’t want to burden them with what you’ve seen and heard.”

He said members of the squad relied on each other for support during difficult cases.

“It’s not for every police officer,” he said.

“Some people wish to be there, and you don’t have to be here if you don’t want to, but everyone that’s here wants to be here to help children.”

“He’s very well regarded by his peers,” Assistant Commissioner Walton said at a press conference. “There will be a lot of people who are very concerned about his condition.”

Child abuser Nick Newman was being hunted by police when he attacked the detective.

In a tweet, NSW Police Minister Troy Grant said his thoughts and prayers were with the wounded officer’s wife, young family and colleagues of injured officer.

Noel Whelan, who is staying at the pub, was nearby at the time of the incident.

“I heard the siren was going off — police, one car, two cars, three cars, six or seven police cars,” he said.

“We were just asked to get out of here and go.

“It was sad to see it happen on Australia Day, you know, when people are out enjoying themselves.”

The ABC understands the incident was not linked to Australia Day celebrations or protests and witnesses have been encouraged to contact police.