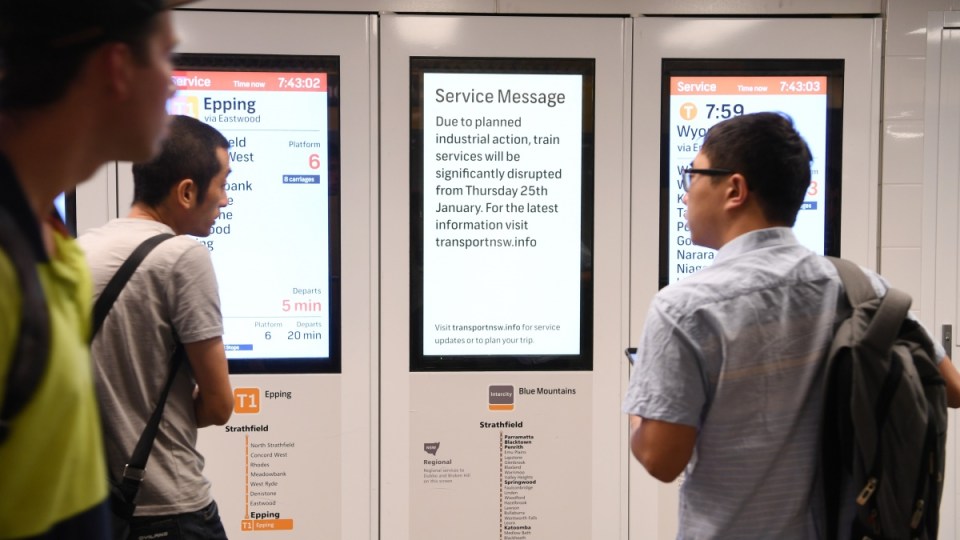 The 24-hour train strike and indefinite ban on overtime was called off on Thursday. Photo: AAP

The state government advertised jobs for trainee train drivers on the same day the Sydney network was exposed for its dependence on overtime work.

Commuters were temporarily spared further disruptions when the Fair Work Commission suspended industrial action for six weeks, forcing the Rail Tram and Bus Union to call off its 24-hour strike and indefinite ban on overtime.

But Thursday saw Sydneysiders “packed like sardines” when the overtime ban first came into effect. The state’s commuters were left wondering how train staff withdrawing overtime could require a 45 per cent reduction in services.

A staff shortage appears to have caught up with the NSW government, which listed positions for trainee train drivers in Sydney on Thursday.

“You don’t need to have rail experience as fully paid training is provided,” the listing said.

“Successful applicants will undertake an intensive year-long training program where you will develop the broad range of skills required of a Train Driver. This will be a combination of classroom and on-the-job training using the latest technologies including a range of train simulators.”

The full-time position advertised a starting salary of $70,000, plus superannuation, shift allowances and annual leave.

An advertisement for qualified train drivers was also listed online on Tuesday, as the RTBU, government, and Sydney and NSW Trains entered marathon negotiations.

That position also had a starting salary of $70,000, with the “potential to earn a six-figure salary”.

The government also sought expressions of interest for qualified train drivers on November 1, ahead of the new and more intensive timetable rolled out later that month.

The head of Sydney Trains, Howard Collins, has previously admitted drivers were doing additional overtime but said 160 people in training would soon be on the job. It’s understood 226 people have been hired since 2016 to account for the new timetable.

The timetable been blamed for recent meltdowns on the system, for slathering on additional services without the additional staff required.

“Our decision not to do overtime shouldn’t send Sydney Trains into a timetable crisis,” a driver told The New Daily.

“Those of us who actually work on the railway want it to thrive and be a world class service for the people of Sydney. Unfortunately poor management – what else would you call insisting on a timetable that you don’t have the staff numbers for – seems to be undermining that.”

Sarah, not her real name, said she was still planning on refusing overtime in her own right, and knew many others who were doing the same.

“They can call off the strike action but they can’t make us work on our days off.”

A Sydney train guard told The New Daily he was angry the strike had not been allowed to go ahead.

RTBU has warned its members not to engage in unprotected action.

Sarah said drivers were often made to work 12 out of every 14 days. Platform staff, meanwhile, sometimes worked 13 days straight.

Sarah said Sydney was losing train workers to Melbourne and Brisbane, where they are paid more and have a lower cost of living.

Melbourne and Brisbane are going to benefit from the conflict here in Sydney as lots of staff have left for positions in those cities or are planning to.”

Drivers work a maximum rostered shift of eight hours and 33 minutes, to avoid fatigue, but are sometimes required to do additional hours.

“In an emergency you may do over 10 hours, but that seems to be happening more regularly now,” he said.

FWC suspended the industrial action for six weeks, in which time the union, government, and Sydney and NSW Trains will attempt to come to an agreement.

NSW Premier Gladys Berejiklian and Transport Minister Andrew Constance thanked the Commission for “vindicating” the government, and slammed the union for polling its members via a text message.

Some members complained they had not received the text message to vote to end the strike.

NSW Transport said it would take several days for the network to recover from the overtime ban. Commuters should plan ahead.