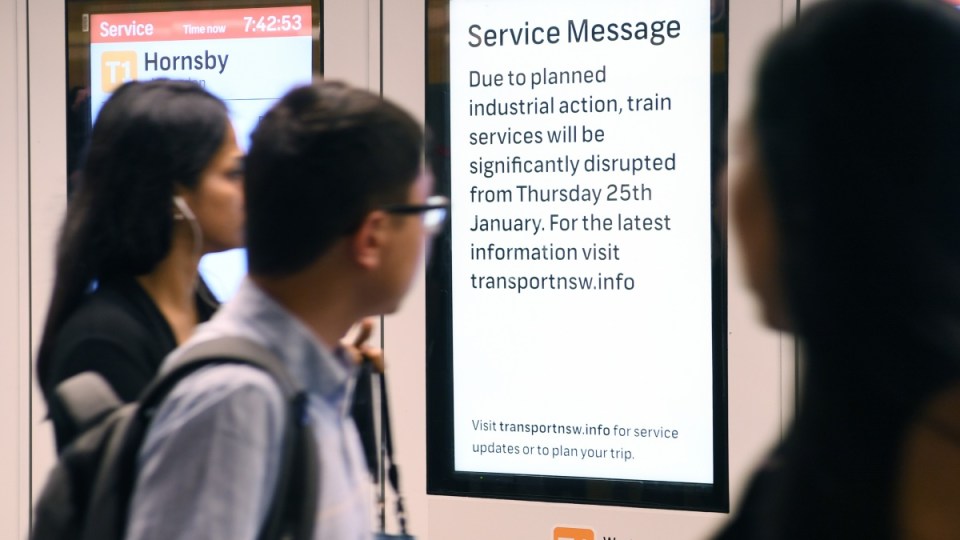 Monday's planned train strike in Sydney has been suspended by the Fair Work Commission. Photo: AAP

A 24-hour train strike that threatened to force Sydney to a standstill has been temporarily called off over fears it posed a risk to public safety.

Commuters are still expected to suffer major delays and overcrowding on Thursday afternoon before the ban is lifted.

Sydney travellers complained of being packed like “sardines” in the morning peak, and the Bondi Junction train station had to be temporarily closed to deal with overcrowding.

Transport Coordinator General Marg Prendergast said she was “even more worried” about the afternoon peak period.

Hundreds of buses have been brought in to manage overcrowding, with 1300 train services slashed on Thursday.

No trains were due to run on Monday across the entire state, but New South Wales Premier Gladys Berejiklian said Monday should now be “business as usual”.

The Rail, Tram and Bus Union confirmed it would not be going ahead with unprotected action.

“Workers don’t want to be in this position. We just want to get back to doing what we do best – keeping our trains moving – but we can’t sit back and let our transport services and wages and conditions continue to be attacked.”

He said the impact the overtime ban had showed how reliant the system is on overtime work.

“The transport minister has squeezed our transport system to the point where it is reliant on workers doing overtime simply to keep a normal timetable running.”

Negotiations between RTBU, the government, and Sydney and NSW Trains management is continuing. The union could return to the dramatic industrial action if no deal is made after six weeks.

He was also satisfied the action would have caused “significant damage” to the economy.

“I have decided that it would be appropriate to suspend the industrial action for a period of six weeks from 6pm today.”

The state government had argued the strike was timed to “maximise damage and inconvenience”.

The government estimated the industrial action would cost the economy up to $90 million.

The lawyer representing Sydney Trains, Michael Seck, told the Commission an average of 440,000 people use the network during weekday peak hours. About 1.3 million people use the state-wide train network each day.

Monday marks the start of the new term for private schools in Sydney and public school teachers, while many will return to work after holidays.

Mr Seck argued some people who provide essential services – including police, paramedics and firefighters – wouldn’t be able to get work, compromising public health and welfare.

The Commission was also told some elective surgery would have to be cancelled and the Sydney Dental Hospital would only be able to deal with emergency appointments.

The RTBU, through lawyer Anthony Howell, said suspending the industrial action would do “very little” to assist in resolving outstanding issues.

The FWC ruling follows a poll by the RTBU, which asked members via text message whether management’s latest pay package was good enough to stop industrial action.

Just 5.93 per cent of members voted to cancel the action.

Workers were offered a 2.75 per cent a year pay rise as part of a package including free bus travel and a one-off $1000 payment.

Ms Berejiklian said RTBU members needed to be given the chance to be properly consulted with an offer.

Train strike called off, but Sydney commuters to be packed like ‘sardines’