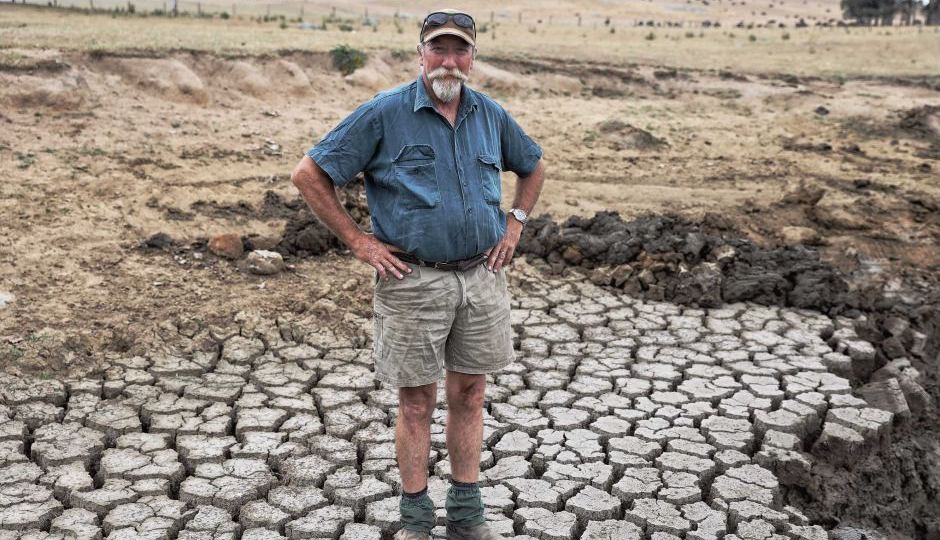 Farmers in the New South Wales Southern Tablelands are in the middle of one of the driest summers in recent memory, and are facing tough choices about how to deal with bone-dry dams.

Water has been scarce on Mark Horan’s Braidwood farm since winter, and a recent spate of hot weather has left him running on empty.

Most of the dams on Mr Horan’s property are dry, and grass for cattle feed is increasingly spare.

“A lot of the older fellas round town said that they hadn’t seen it as bad so early in the season,” he said.

“The Braidwood area is as dry as it’s been for a very long time.

“A lot of the rainstorms that have come through have actually parted around us like the red sea.”

The weather has left Mr Horan with the prospect of selling off stock well before its prime.

“We’ll take a big hit, we’ll probably halve our income on the animals, but in previous droughts they were completely worthless,” he said.

Neighbouring farmer Ian Cargill, who heads up the local branch of the NSW farmers’ association, said the dry spell was compounded by years of lacklustre seasons.

“We’ve just scraped through time and time again, so it’s really starting to stack up this time around,” he said.

“The heat, it’s just knocked the pastures around, it’s taken that last little bit of green that was there … and pretty much turned it to dry straw.

“We had calves go to Wagga on Sunday night for market on Monday, that we would’ve kept on through the autumn and tried to finish to a finished product. We just cut our losses on those.”

For both men, the drought is making it tougher to work their farms, and both are praying for a forgiving autumn season.

The coming week is expected to bring light rain to the region but Mr Horan, whose property has recorded less than half its expected rainfall, was pessimistic it would do much.

“We’ve had rain come through, but they’ve been followed very quickly by high wind, and that’s dried us out pretty quickly,” he said.

“It won’t do anything, it might maintain a little bit of grass coming through now, but — and I know farmers always say this — but we need a good three or four inches to get us started.”

Farmers set to lose thousands amid driest summer in years