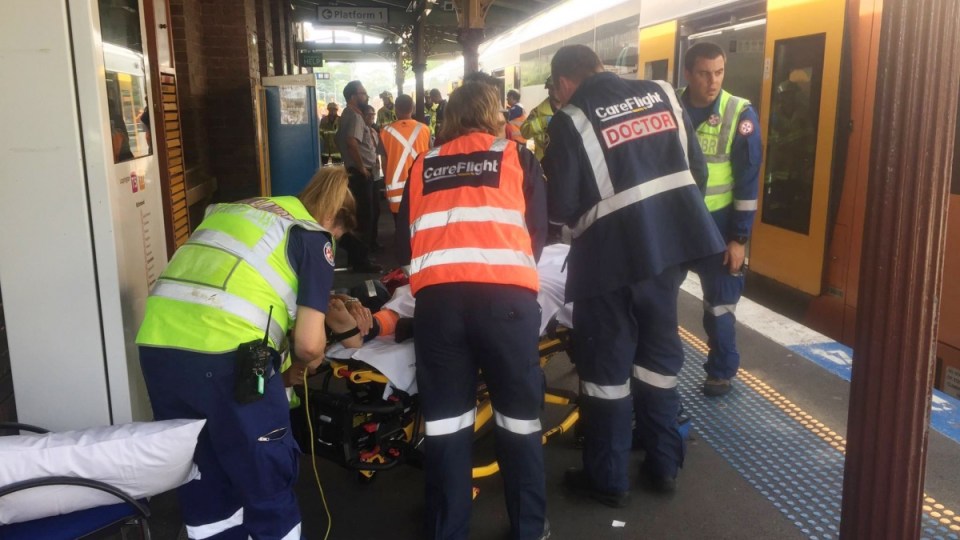 A train smashed into the safety barrier at the end of Richmond Station on Monday morning. Photo: AAP

“Things could have been much, much worse” for 16 commuters injured in a Sydney train crash on Monday morning, a spokesman for NSW Ambulance has said.

Passengers and crew were sent “flying like Superman” when the train crashed into the buffer at the end of the line at Richmond Station, in Sydney’s north-west, shortly before 10am.

The impact caused carriages to lift and dividers between carriages were crushed, photos of the scene show. Thick blood stains were pictured in  the carriages in the aftermath of the incident.

Fifteen were hospitalised, the most seriously injured being a 21-year-old man with a suspected fractured leg.

NSW Ambulance’s Paul Turner said most of those injured suffered back and neck pain and cuts and bruising.

“It was chaos. Things could’ve been much, much worse.”

A triage was established in the adjoining park, and helicopters arrived at the scene. Those injured were transported to Westmead, Blacktown, Nepean and Hawkesbury Hospital by ambulance in stable conditions.

“The patients have been understandably shaken,” Supt Turner said.

A local business owner, who did not want to be named, said the impact of the crash shook his store.

“We felt the shock, it shook the whole building,” he told The New Daily.

One caller to Sydney’s 2GB radio who saw the crash said there was an “almighty bang”.

He said the train came in at speed and hit the buffer and rebounded.

“There was a huge amount of dust,” he said.

Writing on Facebook, Mr Saunders said he was standing on the platform at the time of the “horrifying” incident.

Another said there was “blood everywhere”.

Witness Kimberley Sullivan was going through the nearby McDonald’s drive-through when she heard a loud bang.

“[We] saw that the train had hit the end … it looked like it really slammed its brakes on,” she said.

“It wasn’t going very fast, about five to 10 kilometres an hour.

“We saw the part that connects to the cables came off but then went back on again.”

Sydney Trains boss Howard Collins said it was too early to speculate on the cause of the incident, but from what he had seen, the buffer stop worked “effectively” and stopped the train from derailing.

“It is obviously very concerning,” he told reporters.

The crash comes in the midst of a pay dispute. The Rail Tram and Bus Union has been calling for better working conditions and an annual six per cent pay rise over four years. NSW Transport Minister Andrew Constance has not budged from the offer of a 2.5 per cent cap.

A meeting on Monday morning to continue negotiations was postponed until the afternoon because of the crash, ahead of a planned 24-hour strike next Monday.

NSW Premier Gladys Berejiklian assured commuters that authorities would find out what caused the crash.

“I’ve not seen anything like this in my time and certainly our thoughts are with all the passengers,” she told reporters.

“This is really concerning, fortunately, it’s not something that happens every day and I don’t for a second want to underscore how serious this incident is.”

Trains have resumed between Clarendon and Richmond, a Sydney Trains spokesperson said on Monday afternoon.

-With AAP and ABC