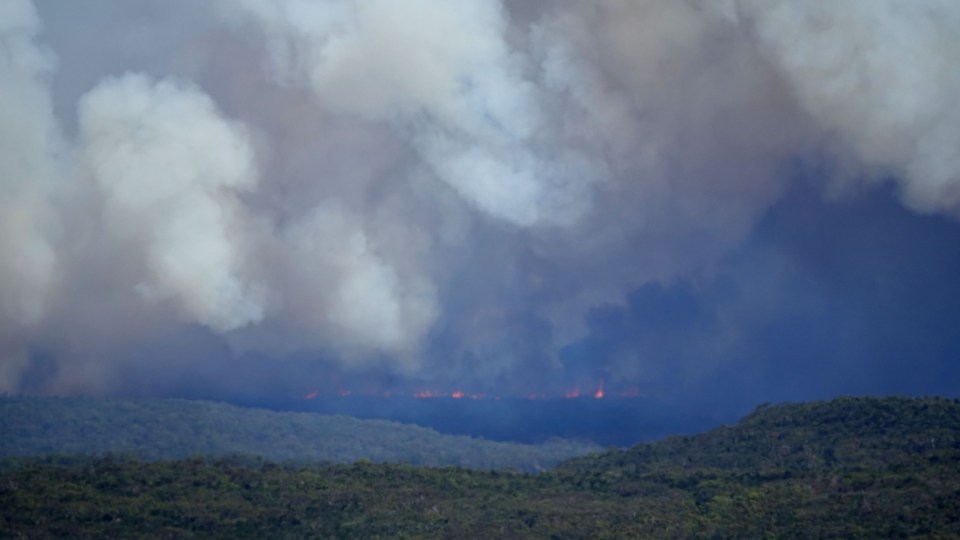 Tourists were rescued from the Royal National Park, south of Sydney, on Saturday. Photo: AAP

Sydney is bracing for another hot day, with temperatures predicted to be in the 40s in the west. Penrith and Richmond are forecast to reach 43 degrees, while the city will be 33 and windy.

Fire conditions are worsening in parts of the state and meteorologist Jordan Notara said there was no relief in sight.

“We’re not having any major changes in temperatures, unfortunately, and generally over the whole state the severe heatwave is predominantly going to continue,” Mr Notara said.

“Inland parts are seeing temperatures generally staying at 40C for the next seven-day forecast.”

NSW Rural Fire Service said about 700 firefighters were battling 38 fires across the state on Sunday.

“Conditions are worsening in parts of the state with very high fire danger conditions now being seen in several areas,” NSW RFS said.

A total fire ban is in place for Greater Sydney, Greater Hunter, Southern Ranges and Central Ranges due to hot and dry conditions.

The Royal National Park will remain closed on Monday after 200 people were dramatically rescued by boat when an out-of-control fire tore through bushland on Saturday.

There was a pretty serious fire in the Royal National Park yesterday. We were never in any real danger but the exits were blocked and at one stage, an overnight stay on the beach without food seemed a real possibility. We finally got out at about 7pm. Scary shit. #beach #wattamolla #bushfire #royalnationalpark #newsouthwales #australia

“There was a pretty serious fire in the Royal National Park [on Saturday]. We were never in any real danger but the exits were blocked and at one stage, an overnight stay on the beach without food seemed a real possibility. We finally got out at about 7pm. Scary shit,” one visiter said on social media.

The blaze, which appears to have been deliberately lit, has burnt through more than 1800 hectares, NSW RFS said on Sunday.

The fire continues to burn, with smoke drifting down the coast at least as far south as Batemans Bay, a three-hour drive away.

Federal Treasurer Scott Morrison, who lives in Sydney’s south, paid tribute to the firefighters who worked throughout the weekend to bring the blaze under control.

RFS Deputy Commissioner Rob Rogers said it was infuriating that someone could think of starting a fire on purpose.

“It is absolutely frustrating as I think the average person in the community finds it just unbelievable that people would do that. Given there was more than one fire obviously we are concerned about how the fires started,” he told the Seven Network.

Mr Rogers said it was lucky nobody was killed, but it could have easily been a very different story if it wasn’t for all the agencies working together.

“And look at the cost – this firefighting effort will cost millions of dollars. There is a cost of these things, let alone that trauma to the individuals,” he said.

Epic bushfires in ‘Royal Nation Park’ this weekend. Good luck to all the CFS and teams helping to manage this out of control fire. . . . #bushfire #royalnationalpark #sydney #fire #parklands

Firies have also been battling a 48,000-hectare bushfire in the Pilliga Forest between Coonabarabran and Narrabri. The fire, east of Baradine, is at a Watch and Act level.

Another fire, west of Bundarra near Tamworth on the state’s north, had destroyed more than 5842 hectares on Sunday afternoon.

More than 1100 hectares have been burnt at Bannaby, with embers creating spot fires in the area.

A waterbombing aircraft is helping firefighters to prepare and protect rural properties as the out of control fire continues to burn.

NSW Police reminded motorists it could be deadly to leave children or pets in a vehicle unattended.

Drivers were also reminded to keep an eye on elderly and disabled members of the community in cars during days of extreme heat.

The Australian Veterinary Association has warned farmers to take measures to protect livestock in the extreme heat.