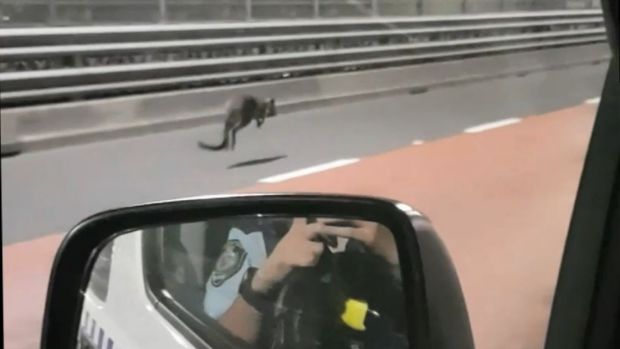 Police followed the macropod across the bridge before cornering it. Photo: Twitter

A wallaby hopping along the Sydney Harbour Bridge surprised motorists early this morning, with police later cornering the startled animal and taking it to Taronga Zoo for a check-up.

Callers to Sydney radio station 2GB witnessed the marsupial jumping about the lanes on the northern side of the bridge just before 5am.

“I couldn’t believe what I was seeing,” said one caller, Michelle.

“I was so worried about the poor little thing. It was just hopping northbound in lane eight.

“I thought ‘No, no way do you see a kangaroo in the city like that’,” she said.

“I’ve only seen them in the country.”

Traffic controllers from the Transport Management Centre, including Dave Wright, monitored the wallaby.

“Traffic controllers had quite a surprise early this morning when we saw a kangaroo making its way down lane number eight of the Sydney Harbour Bridge coming from the northside,” he said.

“It basically continued to hop, making its way from lane eight all the way over to lane one … down the Cahill Expressway and down to Macquarie Street,” he said.

“It was on the Cahill Expressway on top of Circular Quay,” another 2GB caller, Ray, said.

“It was just standing there minding its own business with a police car there with flashing lights and everything.”

Police were later able to pin down the out-of-place animal.

“Officers took the startled macropod into police custody near the Conservatorium of Music, with the Police Mounted Unit arriving on scene soon after to take it to the zoo for veterinary assessment,” police said.

It was thought the wayward wallaby might have made its way to the bridge from a golf course in Cammeray.

Wallaby found on Sydney Harbour Bridge this morning by NSW Police has been assessed and is recovering at @tarongazoo 's Wildlife Hospital https://t.co/DoEKDXHQ6A pic.twitter.com/TKqIYHBpgG