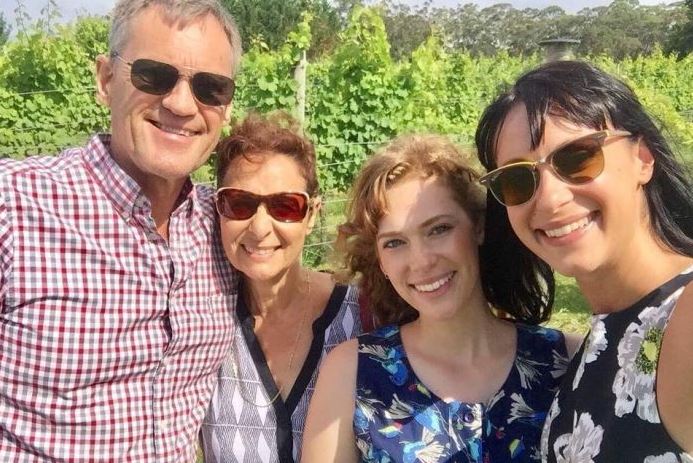 Actress Jessica Falkholt (right), her parents Lars, 69, and Vivian, 60, and sister Annabelle, 21 in their last photo together. Photo: Facebook

Home and Away actress Jessica Falkholt remains in a critical condition after her life support was switched off.

“She remains in a critical condition. The family has asked for privacy during this very difficult time.”

The 29-year-old has been clinging to life in the Sydney hospital since she was pulled from the wreckage of her family’s car on the NSW south coast.

She was injured in a horror Boxing Day crash that killed her parents and younger sister.

Earlier this week, there were conflicting reports about Jessica’s condition.

Channel Seven’s Home and Away, on which she had her break-out role, tweeted, “Rest in peace, beautiful Jessica Falkholt” late Thursday night, and the Daily Telegraph reported she had passed away.

Jessica’s parents Lars, 69, and Vivian, 60, and sister Annabelle, 21, were laid to rest at St Mary’s Catholic Church in Concord on Wednesday.

The family was remembered as an inseparable, radiant group.

Jessica, who has appeared on Home and Away and other Australian shows, was freed from the family car with her sister on December 26 before it erupted in flames with their parents inside.

The Falkholt car was hit by a four-wheel drive, incinerating both vehicles, and parents Lars and Vivian died at the scene while Annabelle died as a result of her injuries last Tuesday.

She had reportedly undergone several surgeries, including the removal of a kidney and part of her skull but remained in a coma since the accident.

Channel Seven released a statement last month saying: “Although her time on set was brief, once a part of the Home and Away family, always part of the family.”

The driver of the four-wheel-drive, Craig Whitall, 50, was reportedly travelling home from a Nowra methadone clinic when he was also killed in the collision.

Police noted last month Whitall had a long criminal history and had been jailed for driving while disqualified.

Whitall was a habitual traffic offender with more than 60 convictions to his name, according to The Daily Telegraph.

The crash, described as “horrific” by onlookers, occurred on the Princes Highway at Mondayong, about 400 metres north of the Bendalong turnoff and south of Sussex Inlet.

Annabelle’s boyfriend, Jordan Brohier, 21, took to Facebook to pay tribute to the much loved childcare worker.

After the crash, relatives of the Falkholts thanked one of the bystanders, Darien Collier, who pulled the sisters from the wreckage and reportedly used scissors to cut the women free.

On Facebook, Cathy Randazzo, a cousin of the sisters, called Collier “our hero” and said “words can not express how grateful we are”.

Meanwhile, the producers of Jessica Falkholt’s film debut, “Harmony,” confirmed that it will be released as planned.

Writing on Facebook, the producers said the film would be “dedicated to Jess and her family so their memory will live on and her talents are appreciated around Australia and the world.”

Home and Away actress Jessica Falkholt’s life support turned off