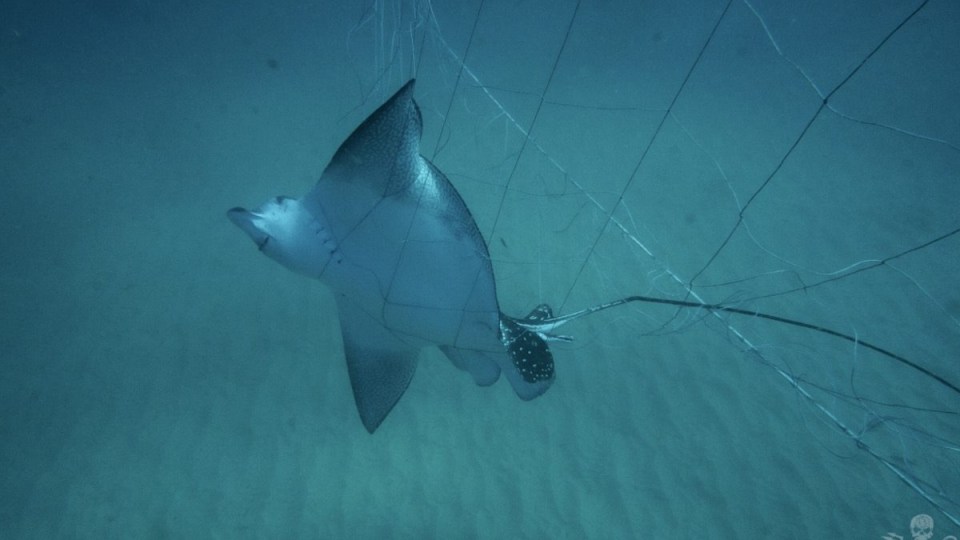 Conservationists will break the law to save marine life tangled in shark nets if the government won’t, NSW Greens MLC Justin Field has warned.

His comments come after activist group Sea Shepherd claimed authorities left two rays to die after being notified they were trapped off the North Coast over the weekend.

Despite a $22,000 fine for interfering with shark nets, Mr Field said people have a responsibility to save injured animals.

“If the government’s going to fail in their responsibility to protect wildlife and respond to a notice that animals are caught in the net, I don’t blame anyone in the community or animal activists going out there and undertaking the rescue themselves,” he told The New Daily.

“Under current law that would be illegal, but if the government is not going to meet their responsibilities then the community will have to take that upon themselves.

I’d challenge the government to change their stance and commit to rescuing any animals found alive in the nets, or will expect that the community will be forced to take action themselves.”

Mr Field, the NSW Greens spokesperson for marine environments, said it was “heartless and cruel” to fine people for rescuing marine life.

“Everyone’s got a responsibility – they see an injured animal caught in a piece of human infrastructure, their instinct is to save it,” he said.

“If the government thinks a law is going to stop people from doing that, they’re kidding themselves and any government that seeks to prosecute someone for rescuing an injured animal is heartless and cruel.”

NSW Minister for Primary Industries Niall Blair said it was a serious offence to tamper with the nets, and could endanger lives.

“If you tamper with nets, you break the law and put lives at risk, plain and simple,” Mr Blair said in a statement to The New Daily.

“Keeping the community safe is our No.1 priority. We don’t want any lives put at risk by acts of vandalism.”

Mr Blair said the government was using different net designs and operations to minimise by-catch in the second trial of shark nets.

“We understand people’s concerns around marine life,” he said.

Trained contractors are required to free all animals found alive in the nets where it is practical and safe to do so, according to the department.

A NSW Primary Industries Department spokeswoman confirmed the department was contacted by Sea Shepherd about an entangled ray.

Asked why the rays were not freed, the spokeswoman told AAP it was important the trial proceeds “as per plans” to allow for the best possible data.

Mr Field said he did not accept that “nonsense” excuse, and said there was decades of data showing the destruction shark nets caused marine life.

Of the 275 animals caught, nine were target sharks, meaning the nets had just over a 3 per cent strike rate.

Of the nine target species – which are white, tiger and bull sharks – four were released alive.

Four bottlenose dolphins, two loggerhead turtles and three green turtles were caught and died in the nets, according to DPI data.

Sea Shepherd inspected shark nets off Ballina on Sunday. The crew said it spotted an eagle ray entangled and struggling in the nets at Sharpes Beach, and another fighting for life off Lighthouse Beach.

Sea Shepherd said it was told the ray would be left to die.

“Sea Shepherd on one hand is told to not interfere with the shark nets or volunteers face heavy fines and charges, even if it means merely freeing non-target species, such as rays and endangered turtles,” Sea Shepherd spokesperson Jonathan Clark said.

“However, the issue is that the government are not responding with their mandatory response times to release marine animals from these indiscriminate killing devices off our coasts. Sea Shepherd is asking the government if they will not release these animals alive, then why can’t we?”

Threat to cut shark nets if government fails to act