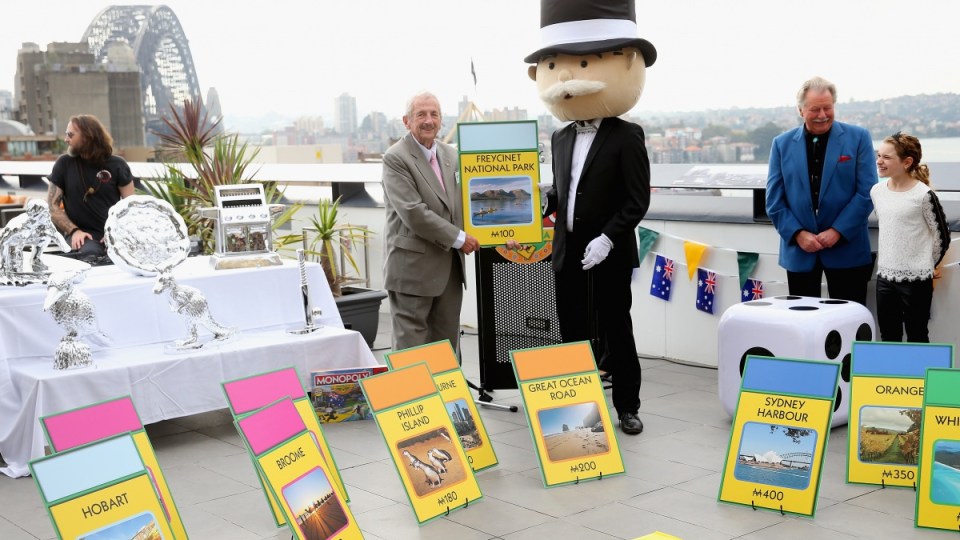 The launch of Australian Monopoly on Sydney Harbour. Tasmania says homeowners in Sydney could trade up in Hobart. Photo: Getty

If you’re ready to trade Sydney’s Bondi Beach for Hobart’s Sandy Bay, the Tasmanian government has got a deal for you.

Sydneysiders who are unable to afford a house, spending long hours commuting or struggling to find a job are the primary targets of the state government’s ‘You in a Year’ campaign.

The $700,000 social media and online campaign features a website that makes much of Tasmania’s lower housing prices and new job opportunities.

It is part of a government drive to get the state’s population up to 650,000 by 2050, with young New South Wales professionals clearly the target market.

Tasmanian Growth Minister Peter Gutwein said the ads would initially only target the Harbour City because research showed it had the highest percentage of agile workers and its residents were the most motivated to look elsewhere to live.

“At the moment, Tasmania is the hottest place on the planet and we want to ensure that the rest of the country knows that,” he said.

In Sydney, you can spend up to 12 hours a week travelling to work. In Tasmania some people will spend around 12 minutes.

“It’s a fantastic location to invest, to find work, importantly to raise a family.”

In the most recent figures, New South Wales lost 11,349 residents to interstate in 2015-16, but Tasmania gained only 42 new residents in the same time.

Macquarie predicted a net 130,000 people to move from Sydney to Brisbane in coming years due to cheaper property and good job prospects, representing a $8.1b billion transfer of wealth.

Tasmania thinks it has a better case.

The YouinaYear.com.au website takes New South Wales visitors through a series of multiple-choice questions, asking “what’s life like at the moment?”, “how are your living arrangements treating you?” and to pick their ideal home situation.

Using the website, a visitor listing their postcode as Bronte-Woollahra is told that the median house price is $3.5 million and “A lot of money … Well, it is compared to what you can get in Tasmania”.

The website offers someone looking for a beachside area and a new house to further investigate Dodges Ferry, east of Hobart where the
median house price is a more modest $285,000.

The aim is to encourage health specialists, hospitality and tourism workers to see Tasmania as a place where they can continue their career and have a better quality of life.

Mr Gutwein said it was hoped the campaign would also encourage expats to return to Tasmania.

Still, less cashed-up Sydneysiders might want to consider that Tasmania is not immune to problems confronting New South Wales.

She said Tasmania needed those professionals targeted by the campaign but overcoming the difficulties faced by locals – such as the struggle to find rental accommodation – should be part of the same plan.

“We have to then look at how we ensure that we can house our own population before we look at bringing in a higher number of people from interstate,” she said.

“If we have an influx of higher income citizens into the state, what that will do if we don’t have a plan around affordable housing and community infrastructure is really push people into the margins.”

Sydneysiders encouraged to buy a better lifestyle in Tasmania