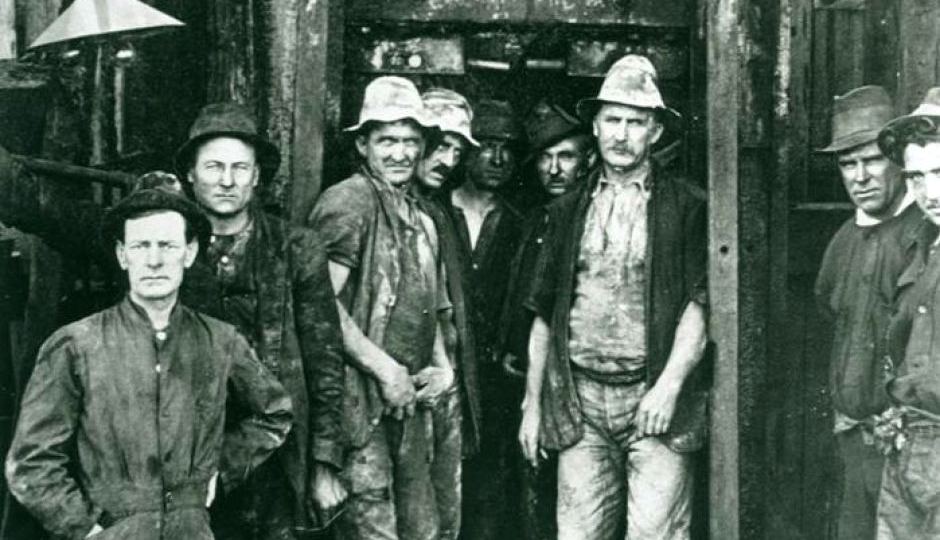 Engineer W.R.H. Melville with some of the miners who worked on the tunnel. Photo: G. Melville/Lane Cove Library

As Sydney faces the construction of twin tunnels under Sydney Harbour for the Metro line, the story of the “first” Sydney Harbour tunnel built about a century ago has been largely forgotten.

The tunnel, dug under Sydney’s harbour at its narrowest point between Greenwich in the north and Birchgrove in the inner west, was a technical feat involving the sort of hard physical labour almost impossible to contemplate today.

Described as very steep to enter and exit, the tunnel was excavated between 1913 and 1924 to provide electricity from the Pyrmont Power Station to power trams in Sydney’s north.

Bill Phippen from the Australian Railway Historical Society in NSW said it was a difficult and dangerous project for the engineers and workers.

“In those days it was just muscles, just men. They decided that blasting in this tunnel was too dangerous, so the whole thing was done by men, with jackhammers and shovelling and wheeling.

“Now you wouldn’t even imagine that. We have giant machines and conveyer belts and road headers. I just don’t think we appreciate how 100 years ago just how manual that sort of task was.”

“There’s an old tunnel under the harbour from Greenwich to Birchgrove. Why isn’t it in use now or considered in current tunnel plans?” he asked.

Former president of the Lane Cove Historical Society, Denis Smith, believes it’s time the tunnel was given proper recognition both as an engineering feat and part of Sydney Harbour’s history.

“At the moment the profile at both sites is just a concrete slab and a small bit of signage. But I think they could do a lot more to anybody visiting both Manns Point and Balmain to get the full story,” he said.

“[There could be] a few more photographs of the construction at the time, including all the water that was pouring into it. [To show] that it was quite an important tunnel because of the cables but secondly as an engineering feat.”

As Sydney expanded at the turn of the century, so did its transport system of trams on the north side of the city.

Massive cables were required to run electricity to the north from the Pyrmont Power Station on the south side, and before the tunnel was built, the cables were run across the floor of the harbour.

It wasn’t long before the cables were damaged and sometimes severed, as the anchors of passing ships caught in gales dragged them along the harbour floor, cutting power to the North Shore.

Historians say it’s impressive that when NSW Railways decided to build the tunnel, they did so without the help of international consultants.

Mr Phippen said there were plenty of obstacles along the way, including constant pressure from water that had to be pumped out continuously.

“They didn’t appreciate how deep the Harbour is — so when they tunnelled down presuming they’d be in rock, they were still in the silt of the valley, [and the] tunnel flooded,” he said.

“It must have been dangerous because vast amounts of water flowing in all the time and the pumps were going flat out to try and keep up with the leaking of the water.

“There was always the risk of flooding, break-ins or the roof collapsing. There is no record of any fatalities or injuries that I’ve seen but that doesn’t mean there weren’t any.”

A Sydney Morning Herald article from 1992 quoted 87-year-old worker Ted Gregory, who recalled working as an apprentice electrician and surviving two cave-ins of the tunnel.

“God it was dangerous and I can’t say I relished the thought of working there. We all knew if the tunnel caved in we’d be goners,” he said.

Mr Gregory was paid several shillings a week plus sixpence in danger money.

Apart from the physical challenges, the workers encountered other challenges such as angry complaints about the noise of excavation from residents at Long Nose Point at Birchgrove.

The residents won the battle and the tunnel work continued in one direction from the Greenwich end.

Why not use the tunnel now?

A spokesman from Transport for NSW said authorities stopped using the tunnel because technological advances in the power grid meant the under-harbour cables were no longer required.

It is also only two metres high so it’s not high enough for any current form of rail transport, he said.

The decision to build the Sydney Harbour Tunnel, which opened in 1992, sparked renewed interest in the Greenwich-Birchgrove tunnel.

Former railway employee Jim Dargan published his 1992 book Sydney’s First Harbour Tunnel, and he believed at the time there was interest in using the tunnel again.

“As this story was being written, in 1991, there was a proposal that the tunnel be used again. It is intriguing that the reason for its re-use was the same as that for it’s construction seventy years ago — to house power cables,” he wrote.

A Sydney Morning Herald article in August 1992 said Sydney Electricity [now privatised], was looking at ways of reusing the tunnel.

A video was recorded via a remote controlled robotic camera, which showed the water-filled tunnel with power cables, a caretaker’s room and other structures still intact.

Electrical engineer John McKay said of the underwater footage: “The exercise was aimed at finding out whether it would be feasible to lay more power cable down there. We’re still looking at the possibility,” he said.

But Mr Phippen said it would be impossible to use the tunnel for any other use, for occupational health and safety reasons [OH&S].

“I think the OH&S ramifications of sending people down this long dark tunnel without proper way of exiting in an emergency or a fire would be just unthinkable,” he said.

Diver Paul Garske admits he explored the tunnel several times with other divers, by accessing it through a hatch at Greenwich. The access point has since been concreted over.

He and the other divers passed their gear down an old ladder and walked down stairs cut into the sandstone, then dived down into the tunnel to about 100 metres below sea level.

“We’d been doing a fair bit of cave diving so we were very experienced and I thought it was very exciting, it was a very fun thing to do,” he said.

“I was able to swim into the pump room at the bottom of the tunnel and over the machinery and that was very interesting, just being able to see a place that very few people have ever seen was very exciting.”

“It was a bit murky on the way down and then when we got right to the very bottom there seemed to be a different layer of water, perhaps a different salinity and it got very, very clear.”

Paul and his dive team tried to buy the tunnel from State Rail to create a training dive site, but he said the sale was unable to go ahead because of question marks over which government authority actually owned it.

He said the tunnel should be commemorated as a significant piece of Australia’s heritage.

“I was down at the park in Greenwich recently and there’s a big concrete slab over the entrance. There’s no signage at all explaining that it was the first harbour tunnel in Sydney,” he said.

The tunnel is heritage listed and is described as “a major technological and engineering achievement …and although flooded is an important element of the development of public transport in Sydney”.

How Sydney’s ‘first’ harbour tunnel has been forgotten