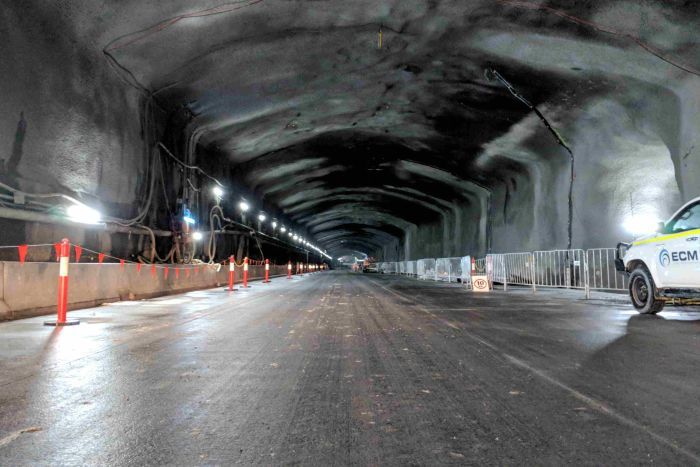 One of the West Connex tunnels. Photo: ABC

On a day when the NSW government was spruiking completion of excavation work on tunnels built as part of Sydney’s WestConnex project, a new report has sounded a warning about the city’s preparedness for blackouts.

An alarming picture was painted by the Energy Security Taskforce (EST) of what might happen if the power failed in New South Wales like it did in South Australia last September.

Sydney could be plunged into darkness for days with thousands of commuters stranded in underground train tunnels and sewerage plants in danger of overflowing if a South Australian-style blackout struck the city.

While the report, released on Tuesday, noted a similar blackout is “highly unlikely” in NSW, it also argued there were “significant gaps in knowledge preparation and planning for black system events”.

And, in the event of a statewide blackout, Sydney would be one of the last places where the lights came back on, but more on that later.

According to the EST, power to the CBD could be down for several days.

Up to 10,000 stranded train passengers may need to be evacuated from the city’s labyrinth of underground tunnels.

The state’s hospitals would come under huge strain if the blackout lasted more than six hours, with all elective surgery cancelled, and hospital food and laundry services for patients scrapped.

The state’s hospitals are equipped with back-up generators to run ventilators, monitors and primary lighting, but diagnostic equipment could not be used and sterilisation procedures would take up to three days.

There would also be no air-conditioning in hospitals, meaning many patients would have to be evacuated.

Fire crews, ambulances and police would also be battling in gridlocked traffic, with all road tunnels shut down and cars crammed onto surface roads.

Light rail services would also stop and ferries, which could have as little as 12 hours’ worth of fuel on board, may need to be used to move people from CBD areas.

Back underground on Wednesday, the media was given a tour of the new WestConnex tunnels by Premier Gladys Berejiklian, but motorists will have to wait at least a year to drive the underground route.

The 5.5-kilometre twin tunnel, costing $3.8 billion, connects Homebush to Haberfield in the inner west. They are the first tunnels built for WestConnex, touted as Australia’s largest transport project.

The Premier said more than 2000 workers helped with the build.

“Progress is significant. I couldn’t be happier,” she said.