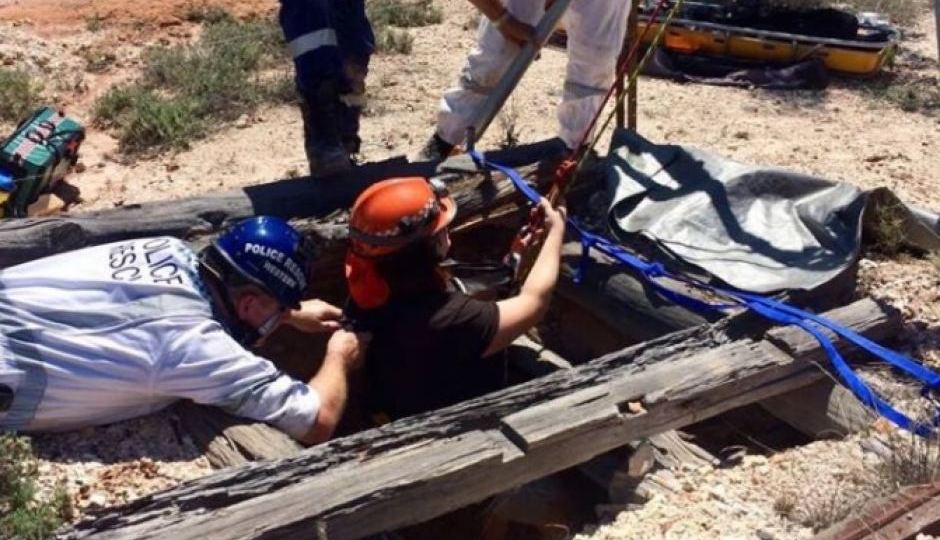 The rescue happened in one of NSW's most remote locations, known for opal mining. Photo: Facebook: NSW Police

New South Wales police say a woman who was rescued after spending two days trapped in an abandoned mineshaft in the state’s north-west is lucky to be alive.

Cinthya Charty, 26, went missing from a mining camp at Lighting Ridge, near the Queensland border, on Friday night.

Her husband reported her missing the next day and a search was launched that afternoon, with temperatures soaring above 40 degrees Celsius.

Ms Charty said she tripped over barbed wire and fell into the mine shaft.

“There’s nothing I could do because there’s no ladder on the hole so I just sat and waited for help to come,” she said.

“I couldn’t call for help, I didn’t have a phone on me, I just yelled and screamed, ‘Help!'”

She said she yelled and screamed at first, but had almost lost hope before she was found on Sunday.

“I was relieved because I thought I was going to die down there,” Ms Charty said.

Inspector David Checkley from the Castlereagh Local Area Command said they were very concerned for her welfare not only because of the heat but also because the area is covered in opal mine shafts.

“Due to poor light, loss of light in the evening, the search was restricted to vehicle searching, due to the number of mines there and just the dangers associated with the area,” said Inspector Checkley.

On Sunday morning a line search involving police and personnel from the State Emergency Service and Rural Fire Service was mounted from the camp and a drone used to scan the wider area.

At 10:20am the searchers found Ms Charty eight metres down a mine.

Officers from the Western Region Rescue Unit used a pulley and harness system to bring the woman to the surface.

She suffered abrasions and was taken to Lightning Ridge Hospital in a stable condition.

Police described her as being in reasonable spirits, and despite the heat above ground, conditions in the mine were not bad.

“She’s actually reported that she was quite cold overnight.”

He said Ms Charty was unlikely to make the same mistake again.

“She’s reported that she went for a midnight walk from the camp, which is obviously dangerous in those sorts of area and she’s found that out,” said Inspector Checkley.

“She’s told us that she certainly won’t be doing that again.”

The area is about 700 kilometres north-west of Sydney.

‘I thought I was going to die down there’: Woman rescued after two days trapped in mine shaft