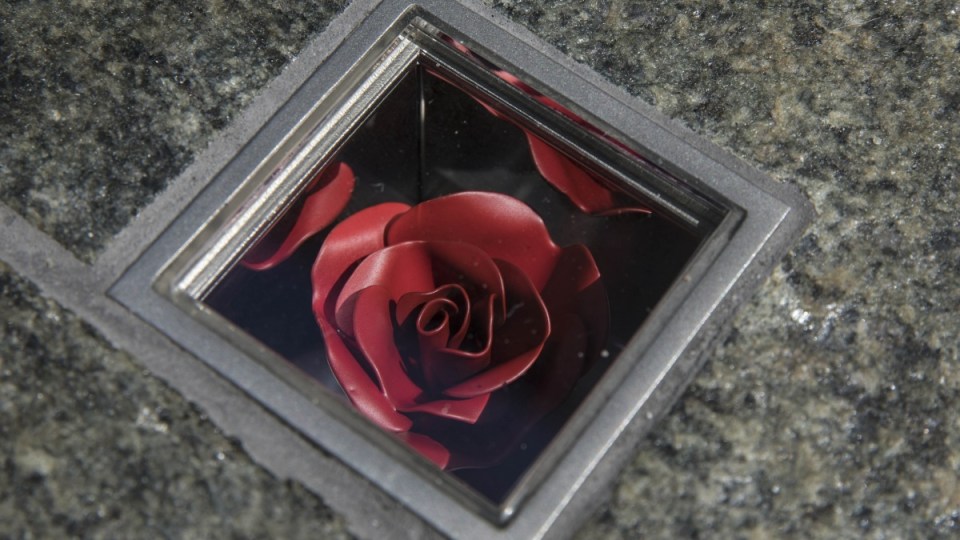 The memorial is built into the pavement at Martin Place with 210 hand-crafted flowers set under glass. Photo: AAP

Lindt Cafe siege victims Tori Johnson and Katrina Dawson’s favourite flowers have been immortalised in a long-awaited memorial unveiled on the third anniversary of the deadly terrorist incident.

Church bells rang out over Martin Place as Premier Gladys Berejiklian officially opened the memorial, which is two blocks from the Lindt Cafe.

In 2014, Man Haron Monis held 18 people hostage for more than 16 hours at the cafe in Sydney’s heaving business hub.

In the days after the siege the area was transformed by more than 100,000 bunches of flowers, inspiring the memorial which has 210 hand crafted flowers set into the ground and covered by glass.

Premier Gladys Berejiklian said the memorial would be a place for people to reflect and remember Johnson and Dawson.

“We gather to dedicate a permanent memorial to the victims of the Martin Place siege,” she said.

“To ensure that Australians today and for generations to come will always understand and reflect on what took place here.

“To Katrina and Tory’s families we say again how deeply and profoundly sorry we are.

“During the day these flowers will reflect the sun, at night they will be lit from above illuminating Martin Place.”

The memorial was designed with the help of the victims’ families.

Lord Mayor Clover Moore said the memorial was beautiful and a very fitting way to remember the victims.

Premier Berejiklian said Dawson and Johnson will be recognised with bravery decorations at a later date.

“I think it’s an amazing tribute to the people that died, hopefully it’s something that the families really value,” he said.

“As a member of the general public it’s a great thing to show and represent the love for the [people] that died [and] their family members.”