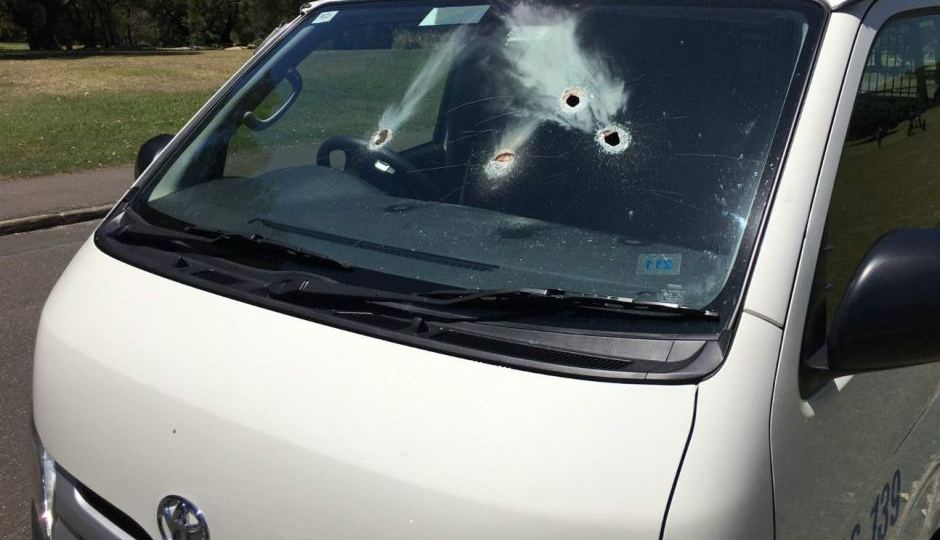 Holes can be seen in a van at Sydney's Centennial Park. Photo: ABC News: Ursula Malone

Police used stun grenades during the arrests on Wednesday morning at the popular park in the city’s eastern suburbs.

The incident happened about 100 metres from the park’s main cafe.

They include the possession of two unauthorised semi-automatic pistols, $649,990 in cash alleged to have been the proceeds of crime and participating in a criminal group.

Mr Hura and Mr Paulo are former players with the Parramatta Eels.

Relatives of Mr Paulo wept in court during the brief appearance.

Both men will apply for bail when their cases resume next Tuesday in the Central Local Court.

Kigi Kamuta, 39, who was also arrested as part of the operation, is applying for bail this afternoon.

Police used “non-lethal projectiles to subdue the men” during the arrest which put holes in the windscreen of a vehicle at the scene.

The arrest was related to an ongoing investigation by the organised crime squad and police said they had been following the men throughout the day.

“[At] the earliest opportunity and safest location we decided to arrest them,” said detective acting superintendent Damien Beaufils.

Former NRL players among those arrested in Sydney’s Centennial Park