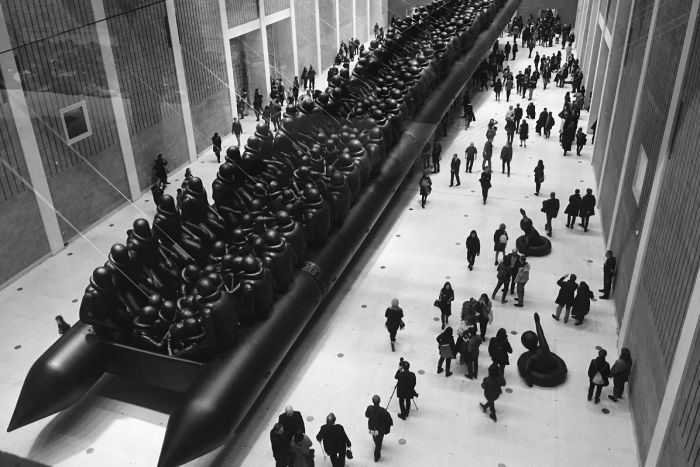 In defiance to the cry of “stop the boats” the Biennale of Sydney is preparing to welcome the largest ever lifeboat of refugees to Sydney Harbour in March 2018 – a 70-metre black rubber vessel bearing 258 passengers, courtesy of Chinese artist and activist Ai Weiwei.

It is made from the same material as many of the dinghies carrying refugees from Turkey to Greece across the Aegean Sea.

Law of the Journey, which premiered at Prague’s National Gallery in March 2017, will take over one of the industrial caverns of Cockatoo Island, as one of three works presented by the superstar artist at the 21st Biennale of Sydney (March 16-June 11), for which he will also deliver the keynote address.

In addition to his giant inflatable sculpture, Ai will bring his 1.7-tonne Crystal Ball (which also premiered at Prague’s Nation Gallery earlier this year) to Woolloomooloo’s Artspace, and present the Sydney premiere of his documentary Human Flow at the Opera House on March 15.

All three works are inspired by Ai’s visits to the Greek island of Lesbos, a key site of the global refugee crisis since 2015 as refugees have sought passage to Europe.

After visiting Greece’s refugee camps in 2015 and setting up an art studio, Ai was inspired to journey to 23 countries across the following year documenting the “human crisis”, as he has called it.

Human Flow premiered at Venice Film Festival in August and had its Australian premiere at the Adelaide Festival in October.

Ai is one of 27 artists from Asia who are presenting work at the Biennale of Sydney, which also has its first artistic director from the region this year: Mami Kataoka, chief curator of Mori Art Museum in Tokyo (and former curator of international art for London’s Hayward Gallery).

Kataoka, who curated the survey Ai Weiwei: According to What? for Mori Art Museum in 2009 (which subsequently toured North America) says of his appeal: “He’s very honest about what he thinks, and he has deep thoughts about freedom of speech and the human condition — partly coming from his childhood.

“He’s somebody who feels he has to engage with these issues.

Obviously the refugee crisis is one of the major issues in the world at the moment, and it seems to be accelerating.”

“Human Flow is a powerful film because he shows visually how many people it affects, how big this situation is, and how serious it is.”

Another favourite of the curator’s, NS Harsha (who received at mid-career survey at Mori Art Museum in 2017), will present a 12-metre long mirrored installation featuring mass-produced cardboard packaging, a painting of the cosmos, and 900 handcarved teak elephants, at the Art Gallery of New South Wales.

“It’s based on this very Indian philosophy that the microcosm reflects the macrocosm,” he said.

The theme of the 21st Biennale of Sydney is Superposition: Equilibrium & Engagement.

Superposition is the principle of quantum physics by which a particle can be in more than one place at the one time.

Kataoka writes in her artistic statement: “The state of ‘superposition’ lies across all conceptual levels: from different climates and cultures to views of nature and the cosmic orders, conceptions of Mother Earth and interpretations of land ownership, readings of human history and conditions, the history of modern and contemporary art and the meaning of abstractions.

“The 21st Biennale of Sydney offers a panoramic view of how they all come together in a state of ‘equilibrium’.”

Kataoka applies the principle of superposition to her understanding of Australia’s policy towards the asylum seekers on Manus and Nauru.

“The situation is complicated: politically, economically, and also the human rights issue. People come to the issue from different value systems, and that’s why you cannot really find a solution,” she said.

She hopes that her edition of the Biennale of Sydney will help people understand and balance different perspectives on the world.

“You go through different perspectives by different artists – how they see the world. And then you realise how many different ways there are of understanding where we are now,” Kataoka said.