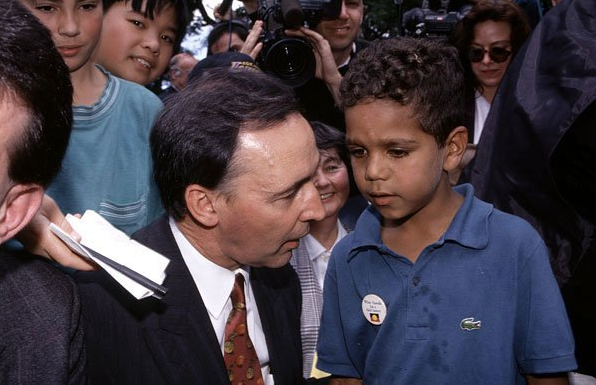 The former prime minister made the landmark speech on Aboriginal and Torres Strait Islander injustices on December 10, 1992.

It was the first time an Australian political leader admitted the impact white settlement had on Aboriginal and Torres Strait Islander peoples.

“It was we who did the dispossessing. We took the traditional lands and smashed the traditional way of life. We brought the diseases and the alcohol,” the prime minister told the crowd gathered at Redfern Park.

“We committed the murders. We took the children from their mothers. We practised discrimination and exclusion. It was our ignorance and our prejudice. And our failure to imagine that these things could be done to us.”

“If anything, Keating’s words are even more powerful today because we’ve gone backwards in so many ways,” CEO Tim Ireland told The New Daily.

“We’ve seen policy after policy enacted upon Aboriginal communities, rather than action being designed in genuine partnership with our peoples.

“I hope Australians use [Sunday’s] anniversary to reflect on the work that’s still to be done to achieve true justice. I hope we can move forward together, empowering Aboriginal communities to take the lead in addressing the continuing crisis in child removal rates, as well as other issues that affect our communities. We have ideas and expertise, but we need trust and resources.”

The gap in life expectancy remains at 10.6 years, and Indigenous outcomes continue to be worse across employment, education, child mortality and family violence rates, according to the Closing the Gap report.

In his speech, Mr Keating said the fight would not be over until there was equal outcomes between Indigenous and non-Indigenous Australians.

“We cannot confidently say that we have succeeded, as we would like to have succeeded, if we have not managed to extend opportunity and care, dignity and hope to the Indigenous people of Australia – the Aboriginal and Torres Strait Island people,” he said.

In a joint statement, Labor’s Patrick Dodson, Linda Burney and Malarndirri McCarthy said the anniversary of the Redfern Address was an opportunity to reflect.

“Today, Keating’s words remind us of our collective responsibility to work towards reconciliation in this country.

Today marks 25th anniversary of Paul Keating’s #Redfern speech, with the mighty Sol Bellear as MC. As we mourn Sol’s passing this week, let it be a reminder to us all that closing the gap & ensuring all our First Nations people thrive must be delivered, urgently. #NeverForget pic.twitter.com/ahABKgumSK

“The impacts of colonisation and dispossession are challenges which remain for Indigenous Australians.”

The Aboriginal and Torres Strait Islander Commissioner urged politicians to dedicate the same passion they put in same-sex marriage legislation to achieving equality for Indigenous Australians.

“We have seen courageous leadership from our politicians. We need to see that again,” Ms Oscar told AAP.

“We cannot afford to lose hope. We must continue.”

Mr Keating’s address came six months after the High Court’s Mabo decision on native title, which rejected the doctrine of terra nullius – that no-one owned the land of Australia when European settlers arrived.

His speech also followed a Royal Commission report into Aboriginal Deaths in Custody.

Bundjalung man Sol Bellear, an Aboriginal rights activist who hosted the Redfern Address and passed away last month, was remembered in a state funeral on Saturday.

‘I am not afraid’: The modern unknown soldier risks it all in Ukraine
Energy market reform will be a big boost for emissions reductions: Chris Bowen
Greens sign up for Labor’s looming jobs-and-skills summit as Liberals stick with boycott
Joe Biden’s $430b green victory for the environment
China cementing its Thailand ties with joint military exercises
NRL: Titans frantic to end 10-game losing streak as Manly showdown looms
Nearly 80 per cent of foreign political donations come from China, data shows
Today's Stories