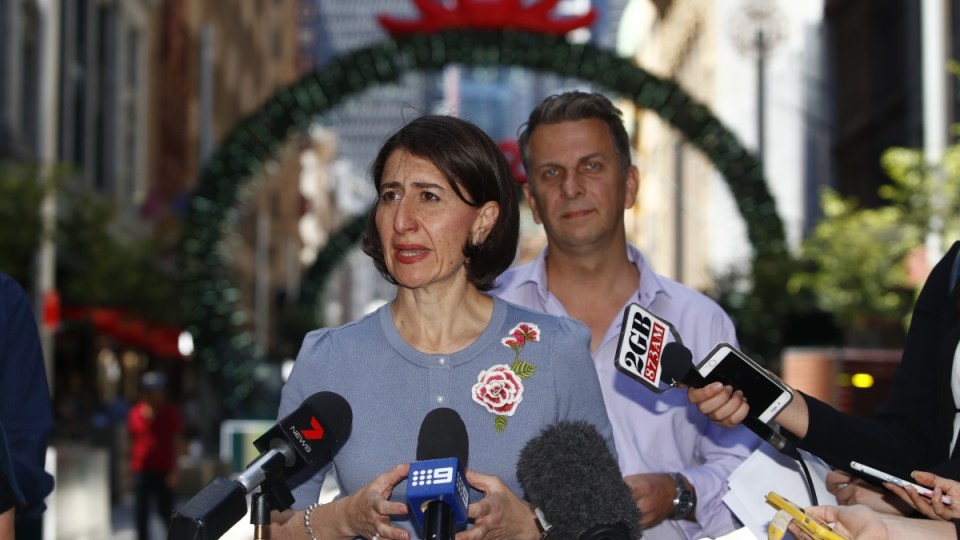 Two angry business owners have interrupted NSW Premier Gladys Berejiklian during a press conference over her refusal to compensate businesses affected by the George Street construction closures in Sydney’s CBD.

Ms Berejiklian and Transport Minister Andrew Constance were announcing the opening of a thoroughfare on George Street on Sunday when local business owners Mark and Jennifer Duff confronted the pair.

As Mr Constance was hailing the fact there had not been “mass closures” Mr Duff loudly remarked his business had seen a steep downturn.

“Well guess what? Your business is about to pick up massively,” Mr Constance said.

He said several businesses had claimed rent assistance, but ruled out any compensation for those affected.

“I’m not interested in this, I’ve made the point. If people want rent assistance it’s available,” he said when asked if he understood the frustration of business owners.

Two angry business owners have interrupted NSW Premier @GladysB and @AndrewConstance during a press conference over her refusal to compensate businesses affected by the George Street closure in Sydney's CBD. #7News pic.twitter.com/c7vEXHGXl1

Mr Duff said their jewellery stores in the Strand Arcade had been hit hard by the George Street closures while the light rail was being constructed.

The pair said they had seen a drop off in about nine per cent in turnover in one of their stores, and 30 to 40 per cent in another store.

“They moved in, they shut down the street, they fenced it all off,” Ms Duff said when asked about the street closures two years ago.

Mr Duff said they had been left in “no-man’s land” with the changes.

“We’ll survive because we do, we have to, we have leases, we just have to make it work,” the pair said.

They said Mr Constance’s lack of empathy was poor and said he wasn’t interested in listening to them.