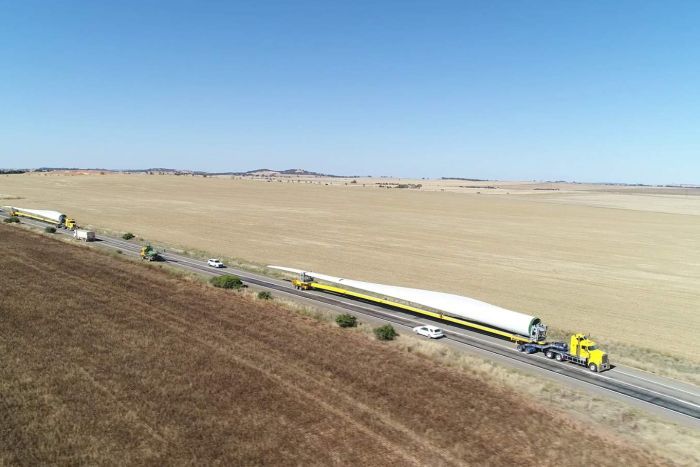 The blades for the Silverton wind farm are carried along the Barrier Highway from Adelaide. Photo: Supplied, AGL

The largest wind turbine blades ever transported in Australia have been delivered to the site of a planned wind farm in far west New South Wales.

Two of the 65-metre blades were towed from Port Adelaide in South Australia to Silverton, near Broken Hill, over the course of about 12 hours on Wednesday.

They are destined for AGL’s Silverton wind farm project, a $460 million development that will see 58 turbines built in the Barrier Range near the township.

The project is scheduled for completion in 2018.

AGL project manager Adam Mackett said the 530km trip had required a great deal of planning, as well as some roadworks.

“When you talk about delivering a blade that’s 65 metres long, you can imagine there’s some tight turns and curves that need to be negotiated, and some works that need to be done on those respective ones,” Mr Mackett said.

“People living in Silverton will be familiar with what we’ve done close to town, and we have to look at the same sort of geometry and issues further out of town as they come up from Port Adelaide.”

A new road was built to allow the trucks to bypass Broken Hill, without which they would have had to negotiate a tight roundabout.

The truck carrying the blade turns off the Barrier Highway onto a side road.

Mr Mackett said the delivery of the first blades marked the start of a series of large deliveries that would last months.

“You will see multiple semi-trailers just with the main cranes. There’s a couple of tower sections that will come through,” he said.

“There will be a couple more deliveries before Christmas, [and] typically early in the New Year you’ll then start to see them quite regularly happening.

There will be relatively constant deliveries from the start of the new year all the way through to about May.”

The project ran into some opposition in Silverton, where residents were concerned about the effects on tourism, local roads and the water supply.

AGL promised several sweeteners for the community, including home solar panels for every resident and an effort to improve mobile phone reception.

An aerial shot of trucks and cranes surrounding a concrete base which is in the process of being poured.

The wind farm, about 20km north-west of Broken Hill, has been in the pipeline since 2008.

Components for the General Electric turbines are being manufactured in Germany, Spain and Korea.

The project has required a new transmission line and substation to be constructed to cope with the additional power being sent into Broken Hill.

It is owned by the Powering Australian Renewables Fund and managed by AGL.