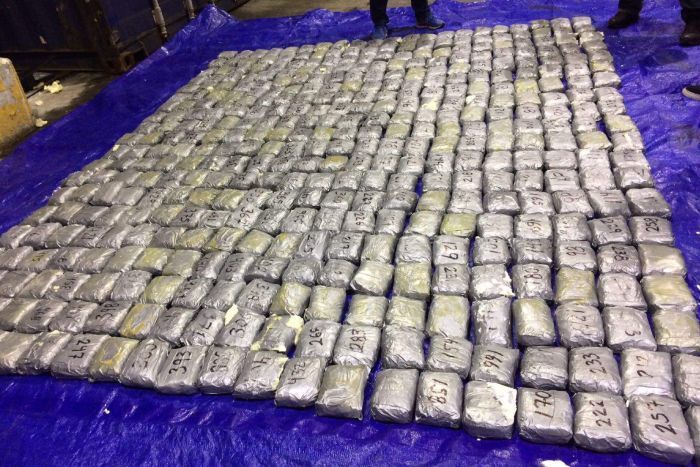 Drug hauls like this massive cocaine seizure went up in smoke before they could damage addicts and the community. Photo: NSW police

Three men have been arrested in Sydney after an international police operation uncovered an alleged conspiracy to import more than 600 kilograms of ice and cocaine from South America to Australia.

Detectives from the NSW Police Organised Crime Squad, the Crime Commission and the US Drug Enforcement Administration began investigating the Sydney-based transnational syndicate in 2016.

Investigators, with help from the Australian Federal Police and Panamanian authorities, intercepted 313 kilograms of ice in Panama on Tuesday.

Police said they also uncovered an alleged plot to import 300 kilograms of cocaine from South America to Australia.

Two of the men, aged in their 60s, were arrested at a warehouse in Alexandria on Tuesday morning. The alleged syndicate leader – a 37-year-old man – was arrested at Coogee a short time later.

They were charged with various offences.

One of the three men, Robert Albert Piras, 60, has been formally refused bail. He was not required to attend proceedings in Sydney’s Central Local Court and will apply for bail on December 15.

“These are three major players at the head of a criminal syndicate importing these large quantities of drugs into New South Wales,” he said.

“The seizure is part of the evidentiary train that we will rely on in terms of proving the conspiracy has been taken place.”

Meanwhile, a 23-year-old Canberra man has been arrested after police seized 356 kilograms of ecstasy at an air cargo facility in Sydney.

The shipment was worth an estimated $40.5 million and the man was charged with importing a commercial quantity of a border-controlled drug.

The shipment was destined for the Canberra suburb of Fyshwick and ACT Policing deputy chief police officer commander Mark Walters said it was the biggest drug haul “of direct impact to the ACT”.

“The drugs were actually seized at the border so fortunately they didn’t make their way to Canberra, but in terms of drugs that were directly related to the ACT this is the most significant drug seizure,” he said.