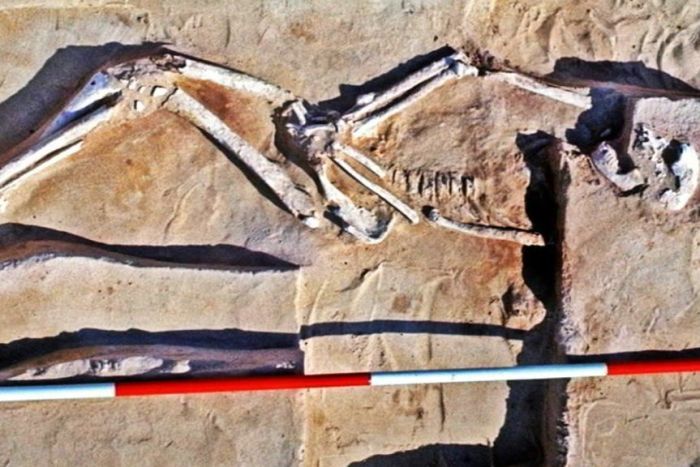 Mungo Man was discovered in Mungo National Park, in south-western NSW, in 1974 and was housed in the Australian National University, Canberra until being returned to country last month.

But indigenous advisory member and Paakantyi man Michael Young said until the NSW Office of Environment and Heritage settled on a final resting place, the remains would stay hidden in a secret location for fear of attacks.

“Unfortunately there are some bad eggs out there that are going to take it upon themselves to destroy any resonance of Aboriginal culture,” Mr Young said.

“We live in Australia. It would be unrealistic to think that wouldn’t happen.

“We would like to see a secure place, a keeping place, an education and research centre linking it in with the local community.”

Mr Young said he had had no contact with the NSW government regarding a final resting place.

He feared Mungo Man would share the same fate as Mungo Woman, whose remains remain hidden despite being returned to country in 1992.

“And she has been sitting in that very same place [that Mungo Man is now] since then,” Mr Young said.

He is calling on the state and federal governments to engage with the indigenous community.

“Start talking to Aboriginal people. We are, have, and always will be here,” Mr Young said.

In a statement, a spokesperson from the state Office of Environment and Heritage said following discussions over three years, the community had decided it wanted to return the remains to Mungo first, then talk about the final resting place.

The spokesperson said the government remained committed to supporting the community in reaching a decision on the most appropriate resting place.