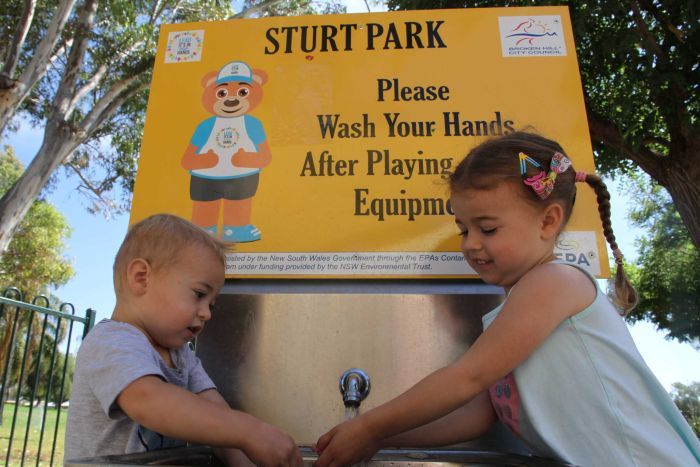 Zac and Issy Toigo wash their hands at a hand washing station in a Broken Hill park to avoid ingesting lead. Photo: ABC

Lead is an everyday health concern in the mining city of Broken Hill in far west New South Wales, and the team behind a program aimed at reducing blood lead levels in children says there are early signs it is alleviating the risks.

The city’s most recent lead level report in 2015 showed blood lead levels in all local children up to the age of five were increasing.

Forty-seven per cent of all children and 79 per cent of Aboriginal children in the mining town had a reading above the National Health and Medical Research Council’s threshold for concern.

But she said she felt like a bad mother when her second child Zac returned a high lead reading.

“You feel like you’ve failed them, you failed to keep them safe,” Ms Toigo said.

Children absorb a higher proportion of lead than adults and researchers have linked it to behavioural, learning and other health issues.

It may take decades to know how to effectively tackle the problem and gauge successes, but it is evident a lot of resources are being deployed to try to tackle the risk of contact.

The Broken Hill Environmental Lead Program (BHELP) was established in 2015 from a $13 million NSW Government commitment over five years.

Lead monitoring dust gauges in five locations across the city are designed to find out how much lead is in the air and where it comes from.

Monitoring blood lead levels is done with the prick of a finger and doctors will often hand over a toy afterwards, something that has been happening in the city for decades.

Both the Child and Family Health Centre and Maari Ma Health Aboriginal Corporation have been responsible for carrying out the blood lead level monitoring, case-managing children with high blood lead levels and helping families with prevention.

BHELP has supported the agencies by paying for extra staff, more home assessments, and portable X-ray fluorescence machines which identify possible sources of lead exposure in the clients’ home.

Lead awareness has been a focus for BHELP, making use of the 1990s Lead Ted character that teaches children ways they can avoid being affected by lead.

Lead Ted Junior is the mascot of BHELP’s LeadSmart media campaign for carers, children and even tradespeople who often carry the lead dust in their homes.

Ms Toigo said the messages today were much clearer than they were when she was a child growing up in Broken Hill.

“I don’t think mum was 100 per cent clear back in the day as to what it was for … I think she’s learnt a little bit with me raising my kids,” she said.

Mum says we drank the rain water [when we were kids] which … is a big no no.”

Ms Toigo said health professionals found that her son’s high blood lead levels were because he licked the soil on his feet.

The level of lead in his blood has been lowered since she started wiping them.

“Trying to keep her out of the dirt, washing her hands before she has feeds … making sure people take their shoes off. That’s a good one,” Ms Johnson said.

It has remediated more than 10 hectares of public land by removing the lead in soil, covering the area in materials like loam, limestone or mulch, and sometimes regenerating the area with plants.

A dust control system on the city’s street sweeper also reduces the amount of lead that goes in the air and avoids recontamination of remediated areas.

BHELP has conducted surveys and data analysis of the LeadSmart campaign and said the community found the materials had influenced awareness and conversations on the lead issue.

Most of the 200 people who were surveyed were exposed to the paid advertising components of the campaign.

Next year, BHELP planned to introduce an online module for tradespeople to get a LeadSmart accreditation, improve Lead Ted Junior’s structured lessons at schools and childcare centres, and design lead awareness resources that fit the curriculum.

But it has recognised there was more work to be done, including overcoming the challenges of reducing blood lead levels in the Aboriginal community.