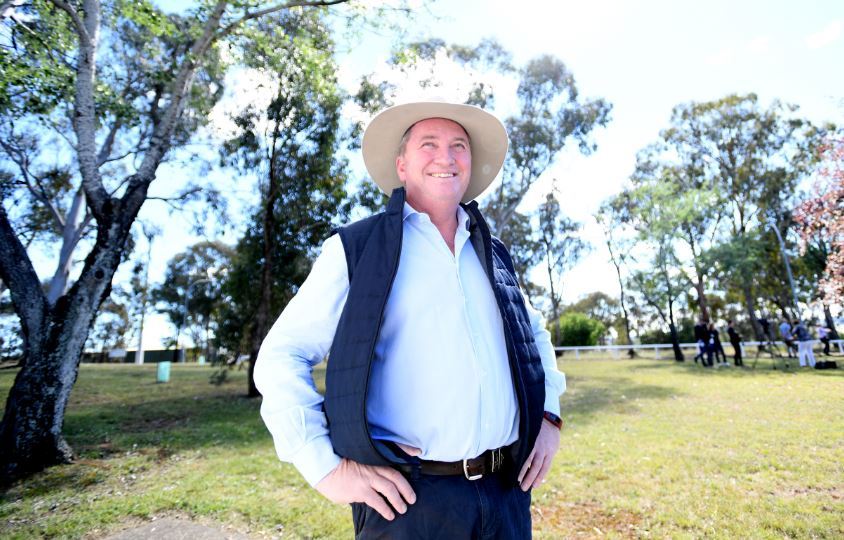 As Barnaby Joyce gets back to business, voters of New England have been left to shrug their shoulders and ask: “What was this all about?”

Many locals have labelled the by-election, which was called because of the deputy prime minister’s New Zealand citizenship, a waste of money.

Mr Joyce secured more than 60 per cent of the vote in what Prime Minister Malcolm Turnbull declared was “the biggest swing to a government” in an Australian by-election.

Despite 16 other opponents, the safe Nationals seat returned Mr Joyce to the second-highest rank in government early on Saturday evening.

But when it comes to Mr Joyce they part ways.

Many saw his dual-citizenship ousting from parliament in October as “childish” politics, which had disrupted one of the nation’s few “true-blue”, rural-focused politicians.

“It’s a storm in a teacup,” Mandy, a store clerk, said on Sunday.

One man said politicians in Canberra were behaving worse than his young children, adding: “We all know the intention of (section 44). He’s clearly Australian.”

Mr Turnbull, who celebrated Mr Joyce in Tamworth on Saturday night, called it a “stunning victory” that affirmed the coalition.

But critics say Mr Joyce was just another politician who had used an Akubra to gain power before turning his back on the electorate to support big business and industry.

“When you sign up to politics you should know your background,” one woman said on Sunday.

“I know if I work at a school I need a working-with-children check.”

Some said they had put Mr Joyce at 17, behind all the other candidates, hoping the NSW seat was shifting away from its history as safe Nationals territory.

However, without a prominent opponent to Mr Joyce, their votes splintered.
Despite their views on Mr Joyce, everyone AAP spoke to said the by-election was a waste of money.

“I’m angry about it,” one woman said.

“That money could have gone to health, our schools or police force.”

“It was a one-candidate race, anyway,” her friend said.

“I’m embarrassed to say how little attention I paid to it.”

Chloe, a barista, said people were annoyed by the process.

“They told me yesterday while they were voting that they were annoyed they had to vote for the same thing again,” she said.