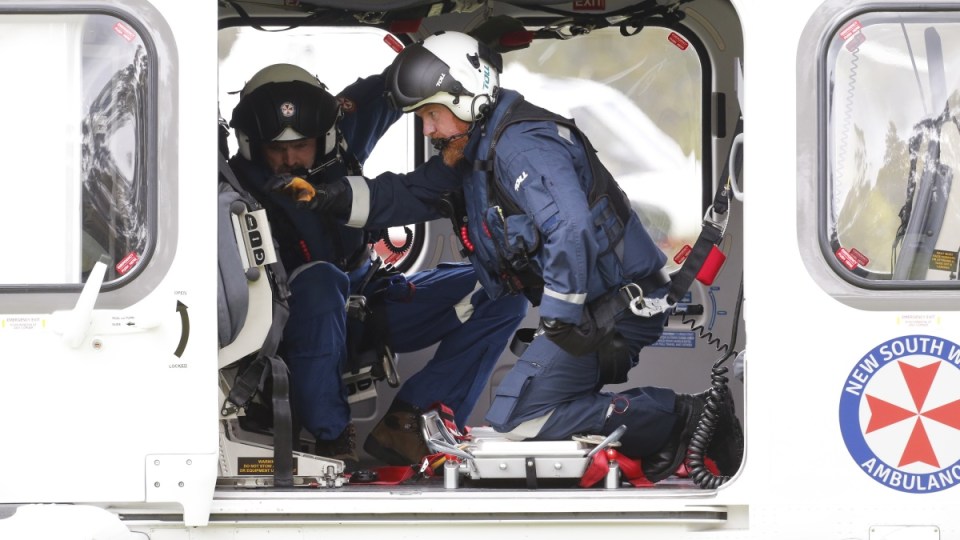 A 36-year-old man has died and two other men are in hospital after being caught in a landslide while working on a rockfall hazard on a closed Blue Mountains walking track.

One of the injured men called emergency services just before midday after a walking track collapsed in the national park at Wentworth Falls.

The walking trail was about 100 metres from the top of the mountain and 100 metres down to the valley.

Emergency crews believe there was a rock slip about 10 metres above the track.

The remote location meant it took emergency workers some time to reach the site of the incident.

The injured men, aged 26 and 27, have both been airlifted to Westmead Hospital.

One man has serious injuries with multiple fractures to both legs and the other has fractures all over his body.

Men are workers, not tourists

“The men were actually working in response to that hazard,” he said.

Police said SafeWork NSW had been notified about the incident.

Dangerous conditions mean it is not yet clear when authorities will be able to retrieve the dead man’s body and a police guard has been assigned to watch the area overnight.

One person has died and two others are injured in an accident at Wentworth Falls. #7News pic.twitter.com/MbIRFRmPkB

Bushwalker Mike Burgess said he heard a “big explosion” on the National Pass track above him.

“I heard this massive – it sounded like dynamite going off – but I knew it wouldn’t be dynamite, it would be a big slab,” he said.

“We heard all the blooming rocks smash down through the bush … right after that I heard a bloke scream.

“I’d say there were some pretty bad injuries down there.”

A multi-agency response coordinated ambulances and helicopters responding to the emergency.

Special Operations Team paramedics trained in remote rescue reached the site on foot while specialist medical personnel were winched in by helicopter to assess the trapped patients.

“The area has been assessed by geo-technical engineers and appropriate measures will be implemented to remove this extreme hazard,” it said.

A NPWS statement released on Wednesday evening said their staff routinely monitored walking tracks in the Blue Mountains and the National Pass track was closed due to “an identified risk”.

“Work to make the track safe was underway by experienced contractors.

“Our condolences go to the family of the contractor who was killed and our thoughts are with the other members of the crew who were injured.”

The NSW Police Force will investigate the cause of the man’s death.

Members of the public have been told to avoid the area.