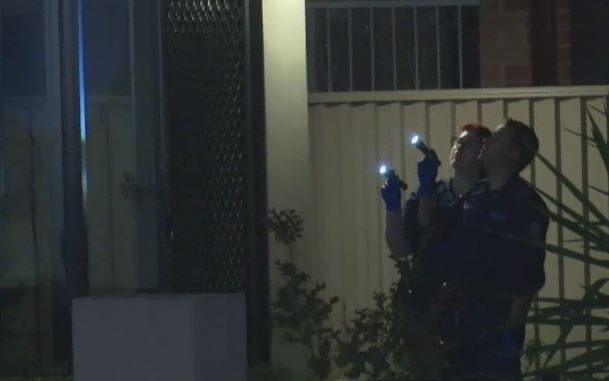 Police comb the street where Semi Ngata was wounded in a backyard shooting the victim refuses to talk about.

New South Wales Police have described the shooting of the Ibrahim family bodyguard Semi Ngata in a western Sydney backyard as “brazen” and “targeted” – but the stone-faced protector is refusing to talk about the incident.

Mr Ngata, 59, was found outside the home of underworld figure John Ibrahim’s mother on Price Street in Merrylands about 10:45pm Friday, with a gunshot wound to his back.

He is in a serious but stable condition at Westmead Hospital.

Tensions were high outside the home on Saturday, with media pushed and shoved as deliveries for the high-profile wedding rolled in.

This afternoon’s confrontation comes less than 24 hours after Mr Ngata, who investigators said was “known to police”, was found with a gunshot wound out the front of the Price Street property.

New South Wales Police said there had been “tensions” between the families.

Mr Ngata, 59, is in a serious but stable condition at Westmead Hospital. The incident unfolded about 10:45pm Friday.

As a car delivering soft drinks arrived at the property, where the wedding will be held in the backyard, several camera crews — including the ABC — were shoved aside.

Rows of white chairs, as well as shade cloth and a small marquee could be seen in the backyard, ahead of the wedding.

A neighbour who asked only to be known as “Khatira” said she heard the drama unfold last night.

“We heard a noise like someone had been shot from a gun.”

“When we checked from our window, everyone was there, the police were there,” she said.

Mr Ngata has had surgery and Khatira said she had seen Mr Ngata walk after being shot.

She described John Ibrahim’s mother as a good neighbour.

NSW Police Chief Inspector Bradfield Peters said the shooting took place in the backyard of a house on Price Street.

“If that’s exactly what occurred then it is certainly brazen,” he said.

“We believe that it’s certainly not random and that it was targeted.”

Mr Ngata — also known as “Tongan Sam” — has had surgery, and is refusing to cooperate with police.

The names of Sam and Aisha along with today’s date have been drawn on the pavement outside of the main Ibrahim family home, where there are rows of white chairs, shade cloth and a small marquee in the backyard.

It is understood Sam is the son of Maha Ibrahim, who is John Ibrahim’s sister.

Chief Inspector Peters would not speculate if the shooting and the wedding were linked.

“We’ve only just found out that there may have been a wedding planned for today,” he said.

“But whether there’s any link to what occurred last night, I can’t speculate.”

It is understood NSW Police seized two guns from nearby Mays Hill, where a second crime scene had been set up after a car was found burnt out.

“Not long after that shooting, that car was found burnt in Rees Street,” Chief Inspector Peters said.

“If any members of the public have information about either of those two events we’d certainly like them to ring Crime Stoppers.”

Forensic officers spent several hours in the garage and the back of the home on Patricia Street and removed up to 10 bags of evidence.