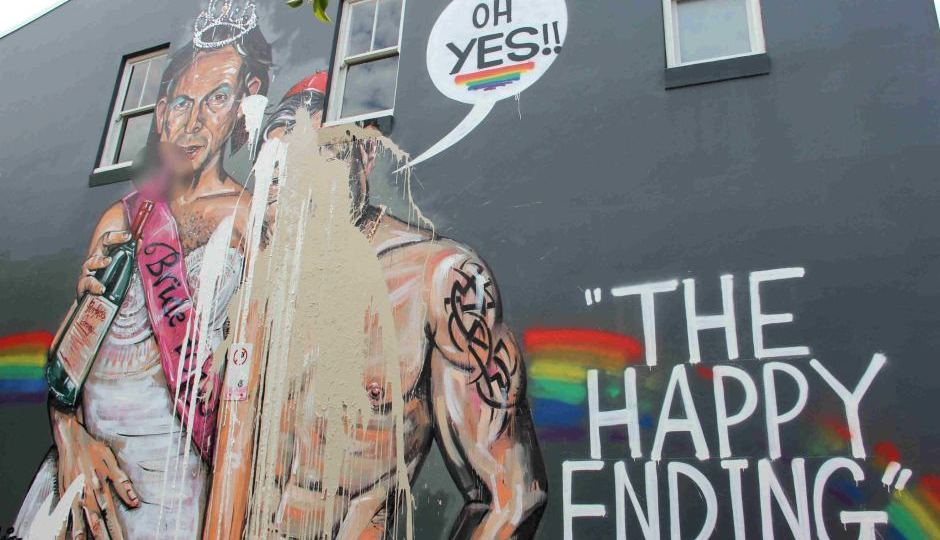 A mural on the back of the Botany View Hotel was finished on Wednesday and vandalised that night. Photo: ABC

There’s been a social media backlash over a mural of Tony Abbott and George Pell painted on a pub after a No campaigner urged people to give the venue bad reviews.

Artist Scott Marsh finished the mural on the back of the Botany View Hotel, which depicts Mr Abbott in a wedding dress with his hand down Cardinal Pell’s pants, on the same day Australians voted in favour of same-sex marriage.

Overnight, beige and white paint was thrown at the mural on Maria Lane in Newtown, obscuring Pell’s face.

Local resident Mike Honen said he saw the picture freshly painted and he was devastated the wall has been destroyed.

“As soon as it got dark, someone hit it,” he said.

“It’s super weird that they have only targeted George Pell and not Tony Abbott, so that says a lot.

“People are just upset and they are going to try to lash out however they can.”

The mood at the hotel on Wednesday night was one of celebration, but that had turned sour since the mural destruction and another campaign to lower Facebook ratings of the pub.

A No supporter posted a Facebook message late on Wednesday night urging people to give the hotel a one-star review on Facebook.

“This is disgusting, it’s only the first day and same sex marriage isn’t even approved yet and Botany View Hotel in Newtown has painted their wall mocking Cardinal George Pell and Tony Abbott as being gay,” he wrote.

“How can we as a society accept this persecution of Christians and allow them to mock our clergy?”

The man urged followers to share his post, call the hotel to make a complaint and also linked them to their Facebook page for “a nice one-star review”.

He finished his post with a picture of the mural and #christianlivesmatter.

Hundreds of negative reviews were posted in the following hours, with more than 1000 one-star ratings logged on its Facebook page by 3pm.

Mark Power, who said he used to be a regular at the pub, posted a negative review on the page.

“To display such abusive filth on the side of their establishment shows utter contempt for 38.4 per cent of the population, and for conservatives and Catholics in particular,” he wrote.

“Their mural unleashes the most vile anti-religious bigotry only one day after the result of the SSM vote was announced.”

He ended his post with: “They have cockroaches too”.

‘The clash of the inner-west’

But local resident Nicholas McCallum said the dropping of ratings doesn’t reflect what the community thinks of the hotel.

“It is unfortunate,” Mr McCallum said.

“It goes against the spirit of Newtown which has a very vibrant, street art scene and it’s also against the hotel.

“If it’s got ratings going down, I would say that is artificial because the place is more popular than it’s ever been.”

Soon, the locals lashed back, with the pub’s page flooded with five-star positive reviews from social media users supporting the business and same-sex marriage.

Colby McQueen said he got online on Thursday morning to try to counter the negative ratings.

“I just rated it five stars this morning,” he said.

“The Botany View is such a great pub … when you see it like that, you get the vibe it’s a sore loser act.

“It’s the clash of the inner-west sort of happening.”

Artist Scott Marsh isn’t a stranger to painting provocation, having already painted another Tony Abbott mural showing the Warringah local member and No supporter depicted marrying himself and Mike Baird at the casino.

The pub’s owners declined to comment and the ABC also reached out to the person who posted the call to review the pub poorly.