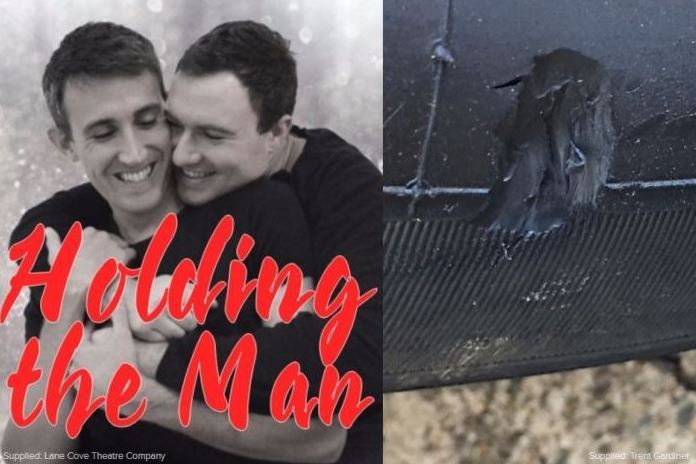 First, posters for the play were torn down - now cast and audience members have had their cars vandalised.

Sydney police have launched an investigation after the cast and audience of a play about a gay love story had their tyres slashed — the second attack on those involved with Lane Cove Theatre Company’s production of Holding the Man.

The play has had a sold-out season, but it appears not everyone is a fan.

After Saturday night’s performance, 12 cast and audience members returned to their vehicles outside The Performance Space at Longeuville and found their tyres slashed.

A police spokesperson said the incident would be investigated for “motives of bias”.

It is not the first time the production, which tells the 15-year love story of two men, has been targeted.

Earlier this month, posters advertising the play at Lane Cove Plaza were ripped down.

The attack comes at a time of significant debate about LGBTI rights is Australia, and less than three days after the Australian Electoral Commission closed enrolments ahead of a national survey on same-sex marriage.

‘Somebody was targeting us’

Trent Gardiner, one of the actors who had his tyres slashed, said the attack had left people angry.

“It certainly leads you to believe that somebody was targeting us,” he said.

“We were appalled and shocked. I don’t expect that to happen here.”

North Sydney MP Trent Zimmerman, who is openly gay, attended the production’s opening night but said it had since been “overshadowed by a series of hateful attacks”.

“This type of behaviour has no place in our local community and should be condemned. Just disgraceful that any person would be targeted in this way,” he posted on Facebook.

Mr Gardiner said only vehicles outside the venue on Sydney’s North Shore had been targeted while others parked on the street remained untouched.

“The vehicles were owned by members of a theatre group,” a NSW Police spokesperson said.

“Police will investigate all motives, including motives of bias.”

The show’s final performance is on Sunday night.