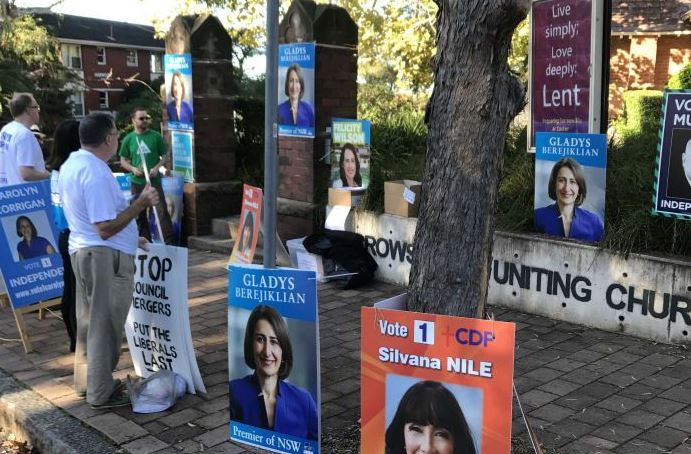 North Shore Liberal candidate Felicity Wilson faced an army of independents but claimed victory despite a swing of around 18 per cent. Photo ABC / Brigid Glanville

Labor has claimed victory in the New South Wales seat of Gosford, one of three electorates where voters went to the polls on Saturday and recorded heavy swings against Liberal candidates.

In the seat of Manly, previously held by ex-premier Mike Baird, who resigned in January, former deputy mayor and Liberal contender James Griffin claimed victory after struggling against a swing of well over 20 per cent.

“I want to thank the voters of Manly for putting their trust in me, and for giving me this opportunity to work as hard as I possibly can for them,” he said in a victory speech on Saturday night.

In both Manly and neighbouring North Shore, each a blue-ribbon seat, anger over council mergers appears to have driven thousands of voters to Independent candidates.

In Gosford, the state’s most marginal seat, voters made local teacher and former Paralympian Liesl Tesch their new MP, with swings to Labor of around 10 per cent recorded at most polling stations.

“I will do all in my power to keep the government accountable for the decisions they make that affect the lives of people on the Central Coast,” she said in a statement.

Liberals had been most concerned about North Shore, a seat it held with a 21 per cent margin, and that anxiety did not ease until late into the night, when Liberal Felicity Wilson claimed victory, defying a swing of around 18 per cent.

Ms Wilson did herself no good in the days immediately before the election, when she had to admit she had not lived in the electorate for 10 years, as had been claimed.

Labor did not field a candidate in North Shore, meaning the result was complicated by a profusion of independents and minor parties.

“A long count to come,” quipped the ABC’s election analyst Antony Green of the final tally after all preferences, which are optional in NSW, have been distributed.

All through the week NSW Premier Gladys Berejiklian made no secret she was bracing for significant swings against her party in both seats, pointing out there was usually a backlash against the sitting government in any by-election.
– with ABC and AAP