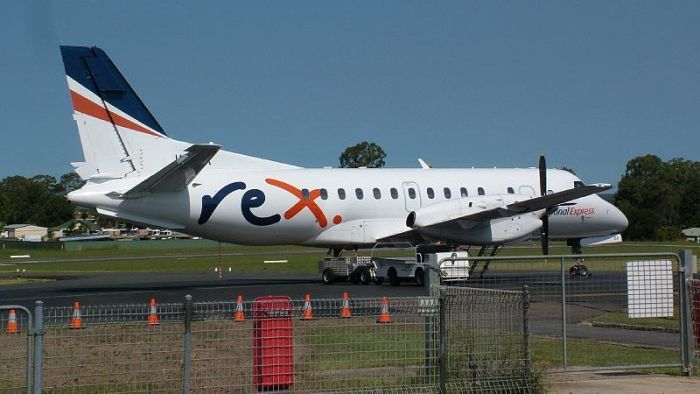 It is the second problem with a Rex Airlines flight this week. Photo: AAP

A Rex Airlines flight has made an emergency landing at Dubbo Airport, the carrier’s second mid-air incident in a week, with a passenger reporting flames coming from flight 821’s engine.

The pilot was forced to shut the engine down after a warning light came on about 10:10am, due to a temperature issue.

Tim Evans was one of 26 passengers on the Dubbo to Sydney flight that landed safely.

“Coming in for that landing was one of the scariest things I think I have ever had to endure,” he said.

“It was a relief to get on the ground.”

The plane is the same model as one that lost a propeller mid-flight over Sydney last Friday.

The Civil Aviation Safety Authority is investigating today’s emergency landing and said it was not linked with any propeller issues.

‘Flames came out of the engine’

“We were about 10 minutes out of Dubbo and all of a sudden there was this big loud noise and a shaking of the aeroplane,” he said.

“I happened to be in a seat just next to the engine and I saw these flames came out of the engine.

“Then it did another big bang and a shake of the plane and all of these embers came out of the engine and I looked at the propeller and it was clear the engine had stopped.”

Mr Evans said he felt sick when he learnt there was a problem.

“I just thought to myself, oh my God, I can’t believe this is happening,” he said.

“We had been sort of joking about the propeller falling off the week before, and here we all were just looking at each other in the plane in total disbelief that this was actually happening.”

Second emergency in a week

Last Friday, a Rex plane was forced to make an emergency landing after a propeller fell off mid-air. Police located the propeller in bushland in Sydney’s south-west on Tuesday.

Both planes that made emergency landings were the same model of aircraft — SAAB 340B.

“It was a little tenuous in the beginning — the report was that there was a plane circling, waiting to land at Dubbo with one engine failed,” he said.

“Due to the great work of the pilot the plane landed successfully, coming to a stop at the end of the runway and was towed back to the apron.”

Regional Express said an internal inquiry would be launched after its second emergency landing in a week.

Professor Jason Middleton from the University of New South Wales’ School of Aviation said the two incidents did not point to broader safety problems with the airline.

“The incidents are unrelated. Obviously the propeller event happened in the propeller shaft whereas this was an engine failure of some sort,” he said.

“It’s always concerning when an engine stops working properly but the crews are thoroughly and properly trained to shut down the engine and return to land.

“It doesn’t send any particular messages about Rex because these events occasionally if you like bunch together.

“Airlines can often proceed for many months or years without any incidents and then by chance they happened in the same week.”