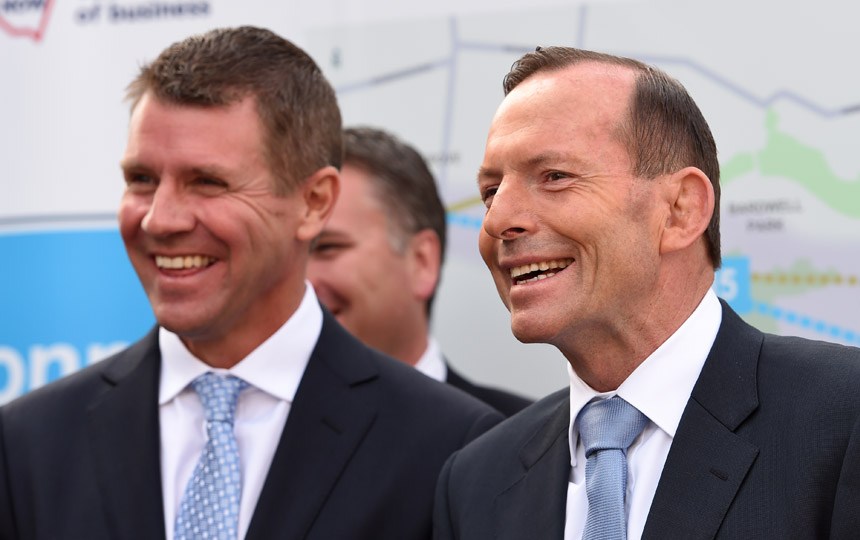 A fight that has pitted Mike Baird against Tony Abbott, a homegrown local against a powerful party insider, and the moderates against the right, will end tonight when a Liberal candidate for the state seat of Manly is preselected.

Whoever emerges victorious will then vie to take the seat of Manly at the upcoming by-election after it was left up for grabs by the resignation of Mr Baird.

The former premier is supporting Mr Griffin — a man considered to be a younger version of Mr Baird who will continue his work in the electorate.

Mr Griffin was born and bred in Manly and is considered a moderate without having formal ties to the faction.

He has previously been recognised as NSW Young Businessperson of the Year for setting up a social media consultancy firm and currently works for KPMG.

On the northern beaches, one nickname bestowed upon the former councillor is “the spruiker”, referring to Mr Griffin’s unwavering support for Mr Baird.

His challenger — Mr Villatora — is from the right faction of the Liberal Party and is known to be a formidable opponent.

He too has a powerful backer — former prime minister Mr Abbott — who has been very vocal about supporting his friend. Ahead of the preselection, Mr Abbott publicly released letters in support of his friend’s candidacy saying his position was very clear.

It is also the second time Mr Abbott has supported Mr Villatora in a preselection ballot in as many years.

Last year, Mr Villatora was one of two challengers in the preselection ballot against federal member for Mackellar Bronwyn Bishop.

He and Mrs Bishop were both unsuccessful but Mr Abbott’s support for Mr Villatora was further evidence of the bitter rift between the former prime minister and the former speaker.

Mr Villatora has held several roles within the Liberal Party including president of the Warringah Federal Electoral Conference.

He is also a businessman holding several senior management roles across different sectors.

The party insider is pushing for the democratisation of the Liberals and he is viewed as a candidate standing up to the Liberal Party establishment, lobbyists and faction warlords.

His preselection would also be advantageous to Mr Abbott because it secures the right influences in that area of the northern beaches.

The northern beaches is Liberal Party heartland but voters in the Manly electorate are considered more moderate.

Mr Baird was a very popular local member but before he was elected, the seat was held by an independent for four terms. Therefore it is a seat that can’t be taken for granted by the Liberal candidate.

The preselection will take place tonight and the successful candidate will then have less than a month to campaign. The by-election will be held on April 8.

Manly pre-selection battle pits Baird, Abbott allies against each other