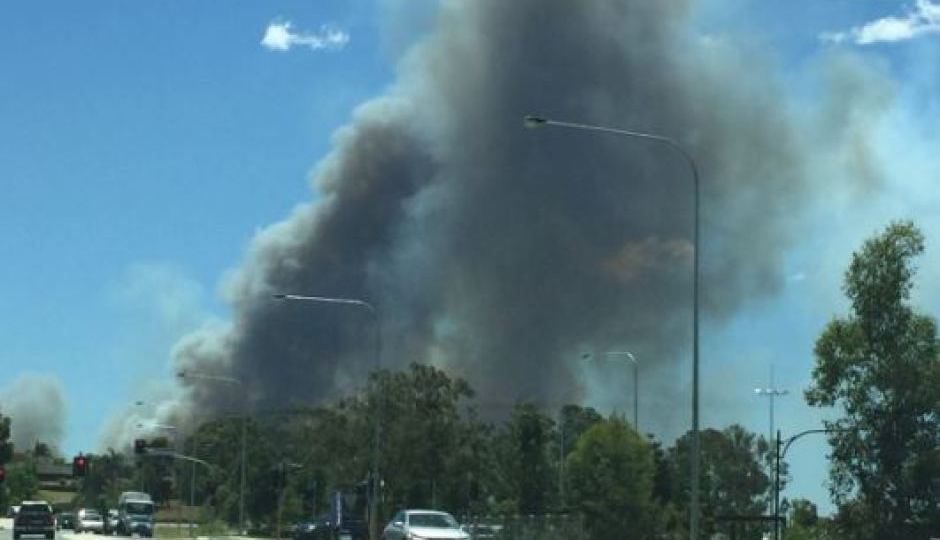 Residents have been advised to take shelter. Photo: ABC

A firefighter has suffered a broken shoulder blade after helping stave off a ferocious blaze which threatened lives and homes in western Sydney.

The 24-year-old woman was among hundreds of firies who protected 55 homes from the fast-moving bushfire at Londonderry, north of Penrith, in hot and windy conditions on Sunday.

She has since been released from Nepean Hospital and is said to be in good spirits.

Firefighters carried out back-burning around containment lines as conditions eased overnight, with close to 400ha of land scorched since the blaze flared up at about 11.30am on Sunday.

The bushfire threat has eased in #Londonderry with residents urged to always take the advice of fire authorities #KIISnews pic.twitter.com/AzVs9CfWjA

Residents around Northern Road in Londonderry were warned it was “too late to leave” and urged to take shelter as the fire ripped through the Castlereagh Nature Reserve throughout the afternoon.

By Sunday evening, they were free to move around again once the fire warning was downgraded to watch and act.

Firies deployed several aircraft as they tackled the blaze, including the whopping water bomber “Thor”.

The flames were fanned by average wind speeds of 30km/h, but gusts of up to 50km/h were detected in the area.

Crews said the bushfire, which produces heavy plumes of smoke to cover the area, escalated around lunchtime on Sunday.

Londonderry: Emergency warning for residents near a fire on The Northern Road. People asked to shelter as fire approaches says RFS. #7News pic.twitter.com/vIenOHmLYu

“Firefighters, with the assistance of water bombing aircraft have worked hard to gain an upper hand and are holding the fire near Spence Street, Government Road and Llandilo Road,” an update just after 5:00pm on Sunday said.

This is the second fire emergency for residents in less than a fortnight, with a “ferocious” fire starting in Cranebrook and spreading to Londonderry and Llandilo on November 3.

A 16-year-old boy was arrested and charged on November 6 with intentionally causing fire and being reckless as to its spread.