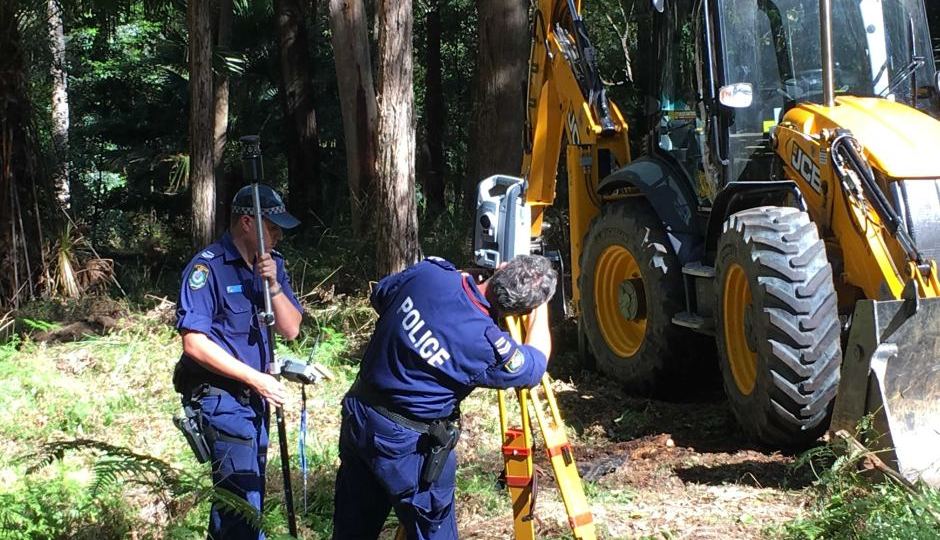 Police officers and a digger work at the search area. Photo: ABC

There is still no breakthrough after four days of searching for the body of missing man Matthew Leveson in bushland south of Sydney.

His partner Michael Atkins was acquitted of his murder.

On Wednesday, he led homicide detectives to a parking spot along a narrow meandering road through the Royal National Park.

For four days now, police officers wearing guns on their hips have directed the work of a mechanical digger, manned by park rangers.

The digger weaves between towering red gums, cabbage palms and turpentines, tearing up undergrowth crawling with leeches before ploughing into the soft, loamy soil.

The warning beeps as it traverses back and forth drown out the birdsong and the sound of Sunday cyclists zipping past.

Police surveyors were at the search site on Sunday morning, mapping and photographing the area.

They have documented ground that has already been searched and soil that is yet to be dug.

The Leveson family has spent the day following progress from a tent set up at the roadside.

‘We want to bring Matty home’

Matthew’s father Mark said he remained hopeful his son’s remains would be found.

“The police are searching a grid pattern to make sure that they miss nothing.

“So it’s long and slow, but in doing that they’re not missing a square centimetre.”

For Mr Leveson’s mother Faye the wait is agonising.

“I just want to be able to lay him to rest and for his brothers to know where he is.”