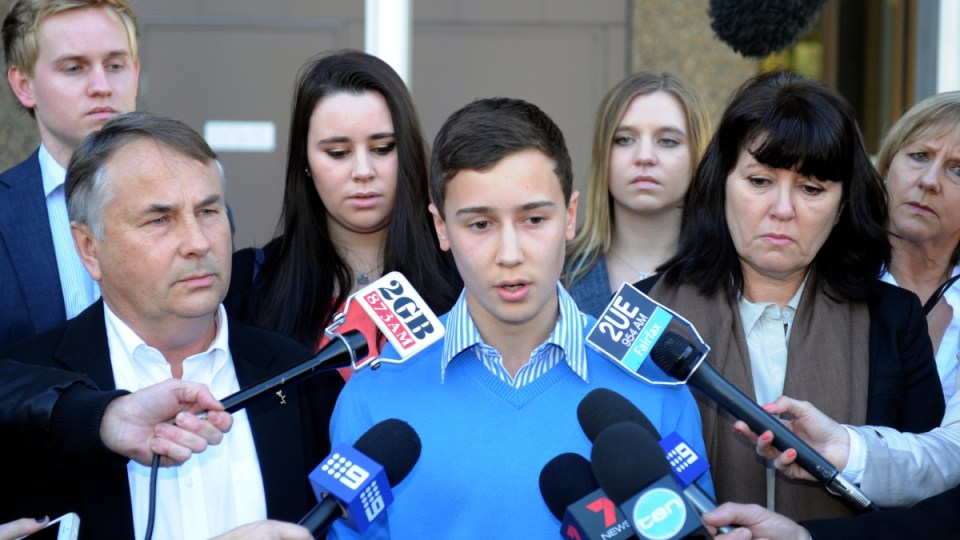 Stuart speaks to media at the setencing of his brother's killer. Photo: AAP

The family of Sydney one-punch victim Thomas Kelly has suffered a second tragic loss with the death of their younger son Stuart.

Thomas Kelly died after he was the victim of a random attack during a night out in Kings Cross when he was 18.

His younger brother Stuart Kelly was just 14 when the incident occurred, and spoke of the traumatic night in an emotional speech at a charity gala last year.

“I look back at that moment: I was 14 years old, I was told by a stranger that my brother, my best friend, was going to die. Those few words would change my life forever,” articulate Stuart told the room.

“I carry a deep scar that you cannot see. It’s always there, it never leaves. It sits below the surface of your skin and surfaces when you least expect it.”

This harrowing second death for the family comes ironically at a time when the laws they helped influence have been shown to save lives.

Thomas was fatally punched in an unprovoked attack in 2012 by Kieran Loveridge.

Loveridge was sentenced in 2013 to 13 years and eight months in prison for the attack.

Police confirmed that Stuart was found dead in Sydney’s northern beaches on Monday. The death is not being treated as suspicious.

On Tuesday, The King’s School – the elite Sydney private school Stuart graduated from last year – posted on Facebook to inform the school community of Stuart’s death.

“As a student, Stuart was greatly respected. He was a school prefect who possessed a quiet integrity that made him enormously effective as a leader,” read the post.

“The strength and character shown by Stuart when his brother was killed by a one punch attack in July 2012, was extraordinary. Stuart has since gone on to support the work of the Kelly Foundation and to campaign against alcohol fuelled violence.”

The foundation helped fund ‘safe spaces’ in the Sydney CBD and Kings Cross on Friday and Saturday nights, and holds a number of fundraising events every year.

In 2014, the Baird government introduced the controversial Sydney Lockout Laws in response to the deaths of both Thomas and fellow one-punch fatality Daniel Christie.

Under the laws, night venues in those areas (and in suburbs Newtown and Pyrmont) cannot admit revellers after 1.30am and must serve last drinks at 3am.

Assaults down in lockout areas

The laws have been met with mixed reactions in the community, but the medical community has welcomed them with gratitude.

A report from the NSW Bureau of Crime Statistics and Research (BOSCAR) also pointed to a steep drop in drunken assaults.

“The January 2014 reforms appear to have reduced the incidence of assault … the extent to which this is due to a change in alcohol consumption or a change in the number of people visiting the Kings Cross and Sydney Entertainment Precincts remains unknown,” the report concluded.

The laws have been overwhelmingly unpopular with Sydney’s live music community and the Keep Sydney Open march rallied 15,000 mostly angry youth earlier in 2015.

One study claimed live music revenue has dropped by 40 per cent in lockout-affected areas.