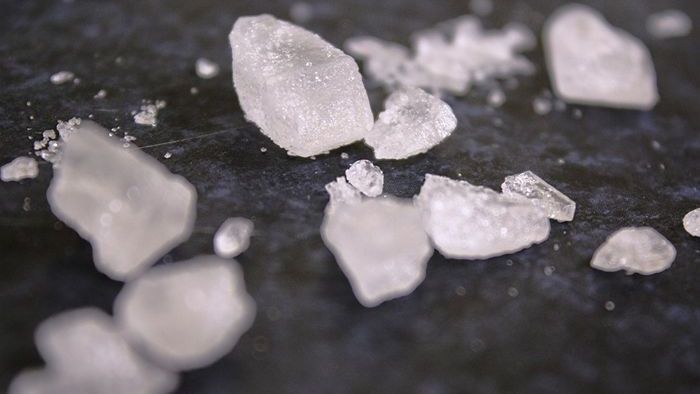 Police swooped on almost 90kg of the drug. Photo: AAP

A Sydney driver who was busted talking on his mobile phone has unwittingly led police to nearly $45 million worth of ice.

Police say they pulled the 26-year-old man over in the Haymarket on Friday after they spotted him using his phone while behind the wheel, only to find three kilograms of methamphetamine, or ice, in his car.

That led them to stop a 30-year-old man carrying a suitcase along Canberra Street in St Johns Park, in the city’s west, on Saturday afternoon. Ten kilograms of ice were seized.

Four hours later, police swooped on a home in the same street, where they arrested a 21-year-old man and discovered $1.4 million cash.

Another search warrant was executed at a home on Ann Street, Marrickville, where police say they found almost 77.6 kilograms of ice.

The total quantity of ice seized is said to have a potential street value of almost $45 million.

The 30-year-old man and the 21-year-old are in custody and will face Parramatta Local Court later on Sunday over proceeds of crime and drug possession charges.

The 26-year-old man has already appeared in court and is expected to remain behind bars until he reappears in Central Local Court on Thursday.

Meanwhile, a man has been shot in the stomach while trying to stop a car thief outside his Gold Coast home.

The 48-year-old was shot once with a rifle outside his Gaven home just before midnight on Saturday.

He was taken to hospital with non-life threatening injuries and the shooter fled the scene on foot.