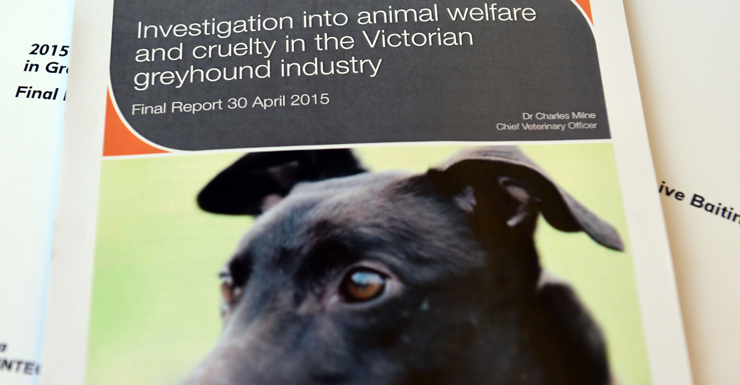 Self doubt is part and parcel of being a journalist. Have we got the story right? What have we missed? Will the public care?

A fortnight before we aired the horrific vision of greyhound trainers using live rabbits, piglets and possums to encourage their dogs to run faster, I still wasn’t sure how widespread the barbaric practice of live baiting was.

I’d seen a parade of trainers in three states and even a former steward of the sport engaged in live baiting, but questions still nagged.

Were the men and women I’d watched tying live animals to a lure just rogue elements in the industry, or was this more widespread? And how had regulators missed this?

As I contemplated these questions over dinner with my Four Corners crew on our last day of filming in NSW, I noticed an old acquaintance at a nearby table.

We hadn’t seen each other for more than a decade, and caught up over a few drinks after my colleagues had called it a night.

We talked about our careers and I told him I worked as a journalist, but didn’t say a word about our greyhounds investigation.

As the night drew to a close, I noticed him checking a sports betting app on his phone for the following day’s horse racing.

He said he liked a punt and told me he even owned a couple of greyhounds.

“Do you train them yourself?” I asked.

“How did you decide which trainer to use?” I wondered aloud.

“This guy’s good because he throws live rabbits to the dogs,” he laughed.

In an instant, any remaining doubt I had about our story was gone.

I knew in that moment that the barbaric practice of live baiting went well beyond any fringe elements of the industry.

In the hours and days after Making a Killing shook the greyhound racing industry to its core, Australians were told by the sport’s regulators and politicians across the country that the barbarity they witnessed on their television screens were just isolated incidents.

The industry would reform — would be better policed — and still had a future in Australia.

Only the NSW government moved to form a special commission of inquiry to investigate live baiting, with the powers of a royal commission to compel witnesses to give evidence.

It was also tasked with investigating wider concerns over animal welfare in the industry.

Eighteen months after the broadcast of Making a Killing, the inquiry has handed down its findings.

They are damning, there is no other word for it. And they reaffirmed what I learnt that night thanks to my old acquaintance with the sports betting account.

Former High Court judge Michael McHugh found that the practice of live baiting was “widespread” in the industry and engaged in by a significant number of participants.

“The commission finds that the practice was, in effect, rampant and chronic,” Justice McHugh wrote.

The inquiry also found that the state’s regulator, Greyhound Racing NSW, had failed to take steps to deal with the issue of live baiting in the NSW greyhound industry, and stated that the behaviour was likely to continue once the spotlight was off the sport.

States make their own judgements

Justice McHugh invited the NSW government to consider whether greyhound racing had lost its social licence to operate in the state.

The Baird government has decided that the industry has, and will shut it down from July next year.

Hours after the announcement, the ACT government confirmed that they too would move to shut down the industry.

In response to Thursday’s decision, the Victorian, Queensland and South Australian governments announced that greyhound racing had a future in their states.

Perhaps they believe the problems are confined to NSW, that the reforms announced in the wake of the scandal were enough to eradicate animal cruelty once and for all.

Only time will tell.

How the ABC exposed cruelty to greyhounds