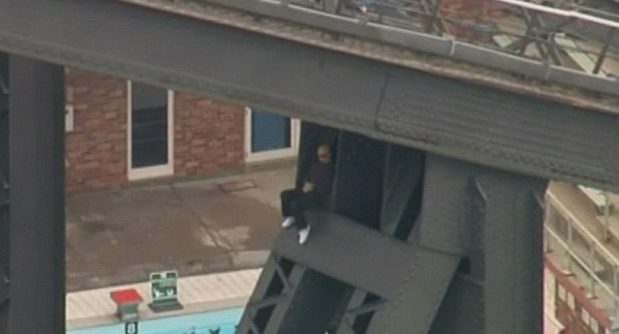 A man has walked across the roadway of the busy Sydney Harbour Bridge and climbed high up its black steel beams, sparking a police operation.

Footage on Channel 7 showed a man seated on the arch of the bridge. Reports said the man took a taxi onto the bridge and asked the driver to pull over while on it.

The man, clothed in all black and wearing sunglasses, is sitting on a beam within the bridge’s structure.

He was arrested soon after coming down late on Friday (June 17) morning and taken to Royal North Shore Hospital for assessment.

During the incident, Ian Wallace from the Traffic Management Network said the man got up to about 75 metres high.

“We have this person, he’s climbed up onto the Harbour Bridge, I can actually see him sitting up there at the moment,” he told 702 ABC Sydney.

“He climbed the fourth [pylon] along and got himself up into the bridge.”

There was a large police presence on the bridge and three city-bound lanes were still closed, causing heavy congestion.

A Traffic Management Centre spokeswoman said traffic was heavy and advised motorists to avoid the bridge or use the Sydney Harbour Tunnel as an alternative, but citybound delays were backed up to Willoughby at 10:45am.

“Due to the lengthy delays in both directions and the protracted nature of the incident, motorists are advised to stay away,” a statement said.

Buses travelling towards the city from the north side of the bridge are stopping at Chatswood, Macquarie Park and North Sydney, where passengers are advised to take a train to continue their trip

Buses were also delayed by up to 25 minutes at 10am.