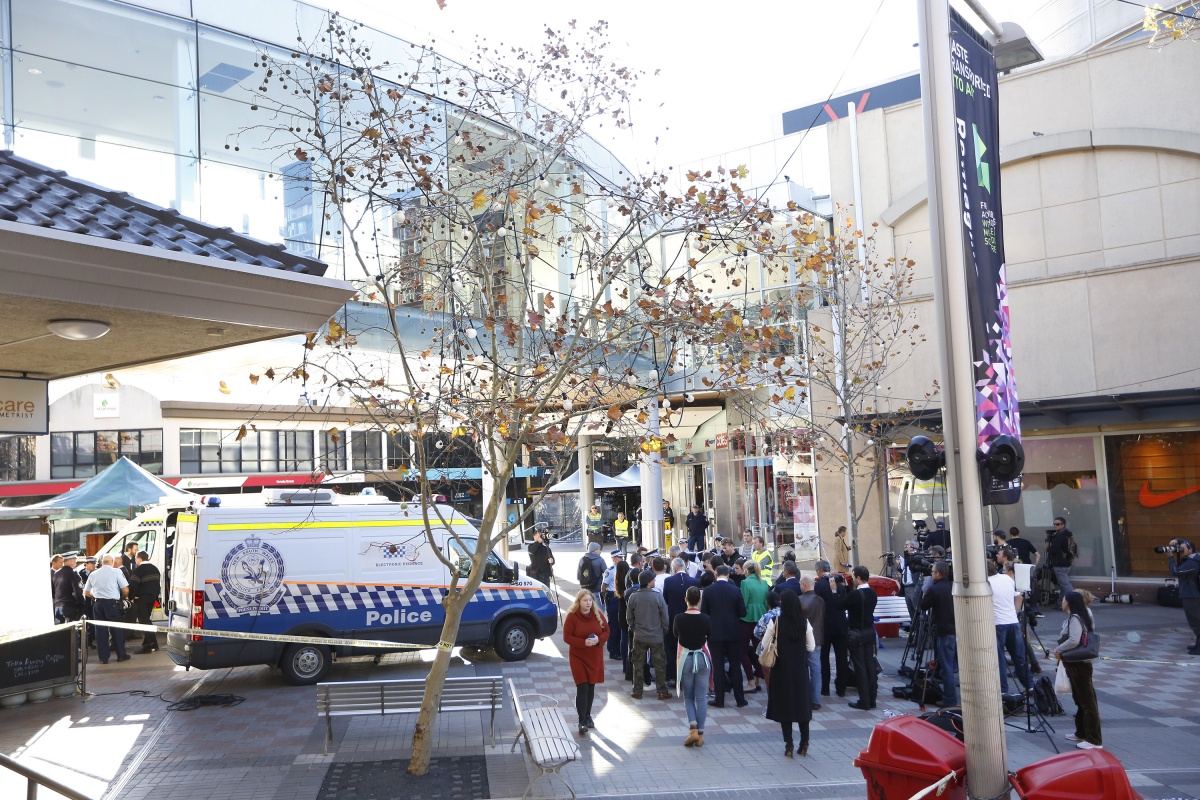 Four people have suffered gunshot wounds after police opened fire at a knife-wielding man, who had escaped from a psychiatric facility, outside Westfield shopping centre at Hornsby in Sydney’s north.

NSW Police Assistant Commissioner Denis Clifford said all four people were injured when police shot at the armed offender after he allegedly lunged at a female officer with a large carving knife.

“Unfortunately some bystanders were also injured with either bullet or fragment wounds.

“All up we have four people that have been injured through gunfire, being the person of interest to us and three ladies who I’m told are aged between 60 and 80 years of age.”

Police have shot a man armed with a knife near a shopping centre at #Hornsby, north of Sydney. Here’s the latest https://t.co/30MkKZAFdN

Assistant Commissioner Clifford said the armed man was known to police, and the ABC has identified him as 23-year-old Jerry Sourian.

“I understand he was reported missing from a psychiatric centre near here yesterday and police were making efforts to try and locate him,” he said.

Assistant Commissioner Clifford said he understood two officers, a male and a female, fired their weapons during the incident.

“In relation to the Taser, that will be part of the investigation, but I must say if Taser was available, a decision was made by those officers in a life and death situation,” he said.

“I understand there’s some good quality CCTV footage. But the officers who viewed that tell me this occurred in a matter of seconds.

“I understand there was a matter of metres in it in the confined area of the shopping mall.”

Another woman, aged 60, is at Westmead Hospital in a stable condition.

Witnesses have described seeing pools of blood at the busy shopping centre after the shooting.

Assistant Commissioner Clifford said there might have been a range of tactical options the police could have used, but each situation was different.

“In this one the officers have made a decision but we do know they are dealing with a person with a rather large knife who came at the officers and they’ve made that decision to use their weapons,” he said.

He said because a critical incident investigation was underway he could not comment on specific details about how the women had been injured.

Witness hiding behind market stall when shots rang out

A staff member at a nearby store, James Yeom, said a man armed with a knife confronted him outside his store before he called the police.

He said two officers responded and asked the man, who was barefoot, to drop the weapon.

“A few minutes later, two police officers arrived and I had to wave my hand to show them where the guy is, and they found him and they asked him to drop the knife, which he refused,” Mr Yeom said.

“He didn’t say anything, but he did not really drop the knife.

“They took out the gun, pointed at him, and asked him to drop the knife again which he refused again.

“And then, they had to shoot him down.

“I was kind of hiding behind one of the market stalls and then I heard two gunshots went off.

“And then I just, kind of, went back to the scene and tried to see what was happening and looks like he didn’t get any shot.

“But instead, I saw some other person, some innocent person, was lying on the ground.”

Mr Yeom said the shopping centre had shut down with the entrance closed and all shoppers evacuated.

Woman covered in ‘river of blood’

Another witness, Andres Navarro, said he rushed to help the 82-year-old woman who was covered in blood.

He said he saw people running away and screaming before he saw the injured woman.

“She got shot here in her knee, behind, and all her leg [there] was plenty of blood, her socks and shoes as well,” he said.

“[There was] kind of a river of blood.

“But she was brave.”

Daniel Campos, who was working at a paella stand, heard four shots and ran.

“At the beginning I thought it was fireworks, but then everybody was so scared, I thought it might be a bomb,” he said.

“It was all really fast. You don’t have time to feel anything, but at the same time really scared.”