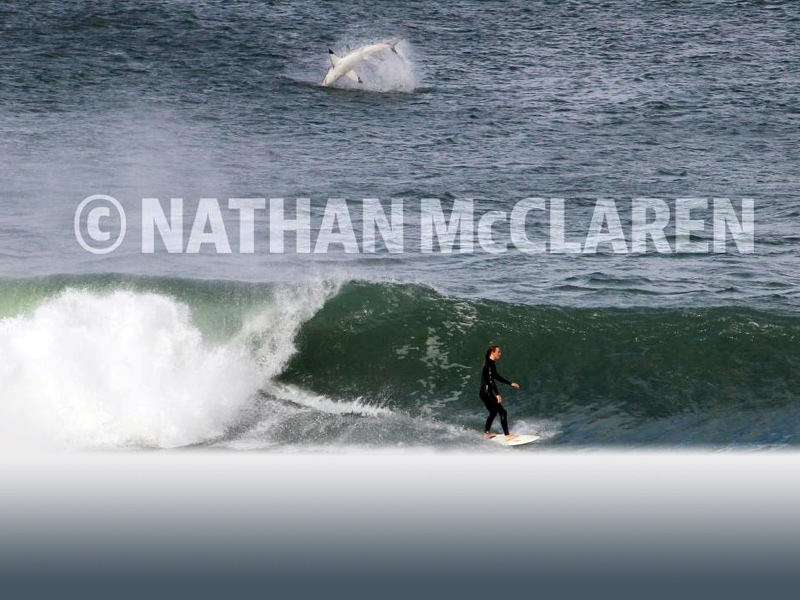 A Newcastle man has captured the moment when a 3.5m great white shark leapt from the water metres away from an oblivious surfer.

Only moments before the incredible photograph was taken at Caves Beach, south of Newcastle, New South Wales, surfer Daniel Caban was paddling furiously onto a wave near the shark.

The shark breached from the patch of water in almost exactly the same spot where surfer Daniel Caban had just been.

The 20-year-old university student was gloriously oblivious to the fearsome killer until people on shore started yelling and waving at him to come in.

“It was just me and one other guy out there,” he told News Corp yesterday.

“A big set came through; he got the first one and I got the second one, but neither of us had any idea what happened.

“We were probably about 50m offshore and the shark came out of the water right where we would have been ­sitting if we hadn’t got our waves.

“I’ve never seen a shark in the water before. Everyone else around here has their shark stories, but I’d never seen one. I guess I still haven’t, but I’ve definitely got a story now.”

Mr Caban told the paper the gravity of what happened still hadn’t quite sunk in.

“Give me a couple of days and I might go back out, but right now I’m just a bit rattled,” he said.

Fellow surfer Nathan McLaren, who captured the image, said people on shore had spotted a shark earlier in the day breaching close by.

“I was taking a sequence of shots of him (Mr Caban) surfing a wave and all of a sudden this shark just came right out of the water,” he told News Corp.

“Everyone was in a bit of shock, saying: ‘Did that really just happen’, but I went back through the photos and there it was. It jumped out of the water about a metre and I would say it would have been at least 3.5m long.”