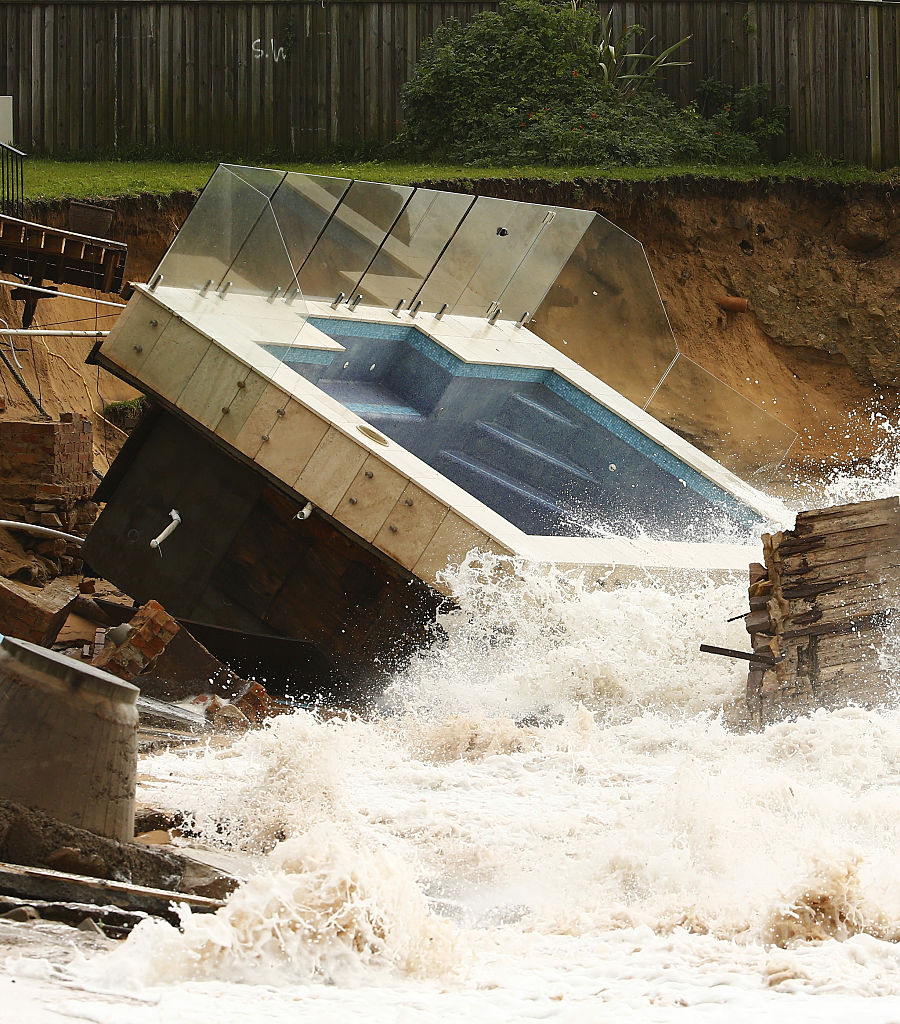 Up to seven beachfront homes in Sydney’s north – some of them on the verge of collapse after severe storms – may need to be partially dismantled.

Angus Gordon, a coastal engineer with 40 years’ experience, has inspected the damaged properties at Collaroy.

“There are a number [of houses] there that we are watching and monitoring very carefully,” he said.

“At this point in time, I would say there would be a need to at least dismantle parts of some of those properties.

“At the moment, the maximum would be seven, but it’s probably less than that – probably more like three or four.”

However Mr Gordon said the state of the homes was only likely to worsen, with another high tide on the way.

“With a high tide they’ll [the waves will] be back up in under the houses again tonight,” he said.

“With those houses, it’s virtually impossible at this point in time to safely get in there and carry out any meaningful work.”

The storms and floodwaters have left four people dead and three people missing across NSW, ACT, and Tasmania, including a man last seen struggling in wild conditions at Bondi Beach on Monday afternoon.

A woman’s body has been found in the water at Dover Heights in Sydney’s east but it is not known if her death was related to the weather conditions.

So far more than 11,000 people have lodged insurance claims, with losses currently estimated to be $38 million – a figure that is expected to increase.

The insurance council has declared the severe storms a catastrophe and has set up a taskforce to deal with any issues that arise.

Homes unlikely to be insured for sea damage

The news the beachfront properties might need to be partially demolished will be salt in the wounds of affected homeowners.

The Insurance Council of Australia has already said the houses are unlikely to be insured against the damage they have suffered.

He said beachfront residents who did not have policies that covered them for the cost of repairs might need to apply for help under state and federal government disaster relief provisions.

“There’s 37 LGAs across the state so it shows the size and quantum of this,” Mr Baird said, while touring the flood damaged area of Picton.

“A huge number of local government areas have been impacted but these funds and support will be available across the state.”

Mr Baird said the first batch of natural disaster declarations meant the areas in question would get financial help quickly, but other declarations would be made when appropriate.

“In practical terms this will provide grants to low-income households whether it be supplies or household goods or the chance to get the house back into order,” he said.

Pending an assets and income test, the jointly-funded Natural Disaster Relief and Recovery Arrangements (NDRRA) will provide assistance to those whose homes or belongings have been damaged.

Concessional interest rate loans for small businesses and primary producers will be made available.

Councils will also be assisted with clean up and restoration costs, and grants will be made available to not-for-profit organisations.

One of the beachfront home owners, Tony Cargorski, earlier told the ABC there were “tough times ahead”.

“We’ve lost another two metres off the back of the house last night and we had the verandah … we had a right post on it – that’s fallen into the ocean,” he said.

“The left part of our sunroom on the lower level … that’s gone.

“I want to come back and with all my heart, with all my soul, see that house intact. And we can resume our lives.”

The council covering Collaroy Beach said it was considering a third sea wall for the area, infrastructure which would be partly funded by homeowners.

However Mr Gordon said it was likely to be costly.

“That plan is to build walls but also to nourish the beach to make up for any deficit with the walls … and damage it might cause to the public beach, so it’s to achieve both ends,” he said.

“You’re definitely looking at tens of millions [of dollars] … if the wall needs to be built.

“The residents … would obviously need to put up some funds towards that.”

Beach homes may need to be partially demolished