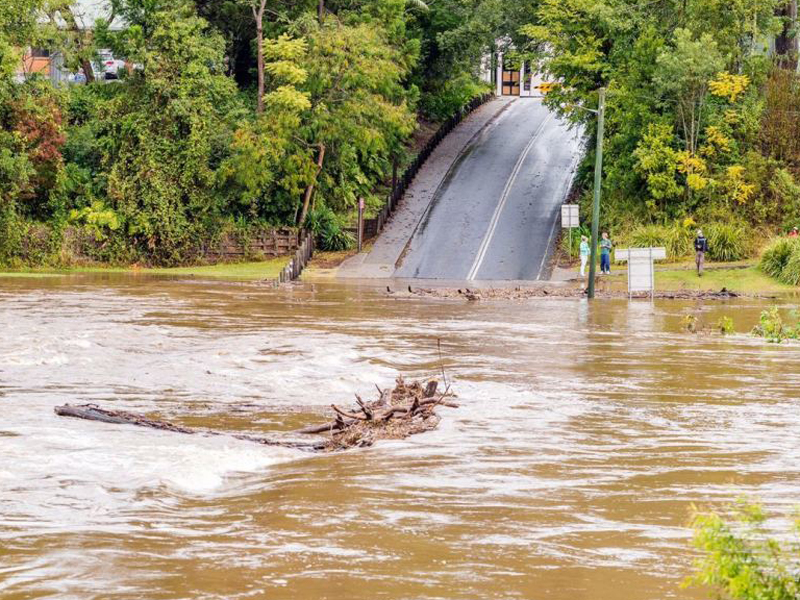 Hundreds of people have been evacuated across New South Wales as heavy rain and damaging winds from a low pressure system batters the state and a dangerous high tide approaches.

The wild weather thrashed parts of Queensland on Saturday and continued to pummel New South Wales, with the low reaching as far south as Tasmania.

Flood watches were issued for rivers across the state including the Georges River and the Nepean-Hawkesbury Rivers, and more than 8000 people have called the State Emergency Service for help.

Hundreds of residents in low-lying areas in the north of the state including Billinudgel, Ocean Shores, Golden Beach, New Brighton and Coffs Creek, on the western edge of Coffs Harbour, were ordered to evacuate due to rising floodwaters and spent Saturday night in evacuation centres.

At Lismore in the state’s north, 500 people were evacuated as the Wilsons River rose, while a compulsory evacuation notice was also issued at Chipping Norton on the Georges River in south-west Sydney.

Waters in Lismore peaked at around 10 metres in the late afternoon, too late for Richmond River High School, which was flooded.

The Georges River was expected to reach 3 metres at Milperra and Picnic Point later this evening.

Authorities have also expressed concern that the highest tide of the year is due to coincide with the storm at around 8:30pm, with severe coastal erosion already taking place.

In Sydney’s northern beaches, residents living near Narrabeen Lake were advised to evacuate as the lake is flooding.

SES spokesman Phil Campbell said a caravan park in the area had been evacuated and crews were contacting nearby residents.

Water is covering some roads and encroaching on the back and front yards of some houses.

The main street of Picton, south-west of Sydney, is under floodwater and residents are being evacuated.

The Picton Valley Motel is currently being used by emergency services as an evacuation centre, according to its owner Matt Regan.

“They want blankets and towels and things for the people at the moment and they want however many rooms we’ve got possibly, if they need to,” Mr Regan said.

“The main street has come up quite quick, I think within two hours it was flooded well and truly and don’t think people were expecting it to come up so fast.”

A search is also underway in Sydney’s south-west following reports of a car being submerged.

Emergency services were called to Leppington about 5:00pm after a resident saw a car going under.

SES crews are now in boats searching for the car. It is unclear whether there was anyone in the car at the time.

Elsewhere in the city’s Northern Beaches region, women presenting at the Mona Vale Hospital’s maternity unit are being told to head to Manly Hospital following flood damage to the building.

People at Coffs Harbour marina had to be rescued from boats

BoM manager of weather services NSW James Taylor said there were waves of 13.3 metres measured at the Manly hydraulics buoy.

“It’s very likely that we will see water levels pushing higher than the highest tide of the year,” he said.

On the state’s mid-north coast, people at a marina in Coffs Harbour had to be rescued from their boats after a boardwalk was badly damaged in heavy surf.

The closure affects all incoming and outgoing flights.

A spokeswoman said airline passengers may experience delays and they are urged to contact their carriers for more information.

The high tide will again hit tonight at 8:30pm, he said.

“It’s very likely that we will see water levels pushing higher than the highest tide of the year,” he said.

Meanwhile on the state’s mid-north coast, people at a marina in Coffs Harbour had to be rescued from their boats after a boardwalk was badly damaged in heavy surf.

The ABC understands police have ferried them from the boats to shore because parts of the marina have been broken.

Philip Cook, who has lived on his yacht with his wife for 28 years said he saw part of the dock disintegrate. He ran to get his wife and then they both swam to safety.

With the worst of the weather heading through the state’s south this afternoon, the SES shifted focus to Sydney and the Illawarra.

“Over the next 12 hours or so our focus will be on Hawkesbury Nepean system and whether or not we’ll lose access to some road networks in the western part out towards Penrith,” SES Deputy Commissioner Mark Morrow said.

He said residents in the area should look to make alternative arrangements for work on Monday as roads may be closed.

Door knocking is taking place around the Georges River in Sydney’s south.

Major flooding is expected around the Bega area, but Deputy Commissioner Morrow says flood levels have been hard to predict.

‘You wouldn’t walk into a bushfire, why drive in floodwaters?’

Emergency Services Minister David Elliott said the thousands of calls to the SES over the past two days highlighted the intensity of the weather system.

He said that he was disappointed that the SES was forced to do so many flood rescues.

“You wouldn’t walk into a bushfire, so why would you drive into floodwaters?” Mr Elliott said.

“Please remember, when you put yourself in danger, you are then endangering the lives of emergency services workers, many of whom are volunteers and that is unacceptable.”

The most recent Bureau of Meteorology (BoM) severe weather warning, issued at 10:00am, said the low would “deepen as it moves southward” to Sydney and the south coast.

Damaging winds with gusts of up to 125 kilometres per hour are being experienced in the north of state.

Adam Morgan from the weather bureau said the low was currently to the east of Port Stephens, north of Newcastle.

“It really is the South Coast that we are watching really carefully tonight because they’ve got a good 24 hours left in this rain event and still a lot of rain to come for them.”