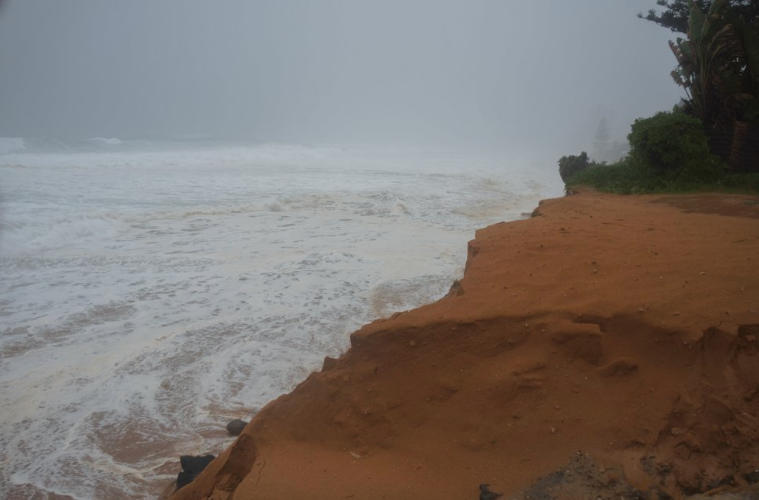 Stunning footage has emerged of a man catching fish from his second-storey balcony during New South Wales’ remarkable weekend deluge.

When Narrabeen Lake on Sydney’s Northern Beaches flooded, property owner Vincent Cotte decided to make the most of the high waters.

Mr Cotte took advantage of the fact the lake had swelled right up to his property, which was usually 30 metres away from the waterline.

Mr Cotte threw a fishing line into the water from his balcony and was stunned at the result he managed to achieve.

As he threw his catch back into the lake he said: “It’s like Christmas … Look at them, there are heaps of fish.”

One video was taken from below Mr Cotte while another was shot from the balcony.

Watch the videos below:

Earlier on Sunday, residents from the nearby North Narrabeen Caravan Park and the Sydney Academy of Sport and Recreation were forced to evacuate for fear the lake would dangerously flood.

As of Sunday evening, 100 millimetres of rain had fallen in 24 hours, according to the rainfall monitor closest to Narrabeen.

Directly inland from Narrabeen, 170 millimetres of rain fell at Turramurra and 160 millimetres at St Ives, in the same amount of time.

Images posted to social media from Narrabeen showed flood waters rising over cars and into homes.

Hundreds of people were evacuated across NSW on Sunday as heavy rain and damaging winds from a low pressure system battered the state and a dangerous high tide approached.

The team – which has in the past warned flash flooding will increase as the climate changes – would be out over the next couple of days collecting data and measuring the damage to the coast with the help of drones, quad bikes and jet skis.