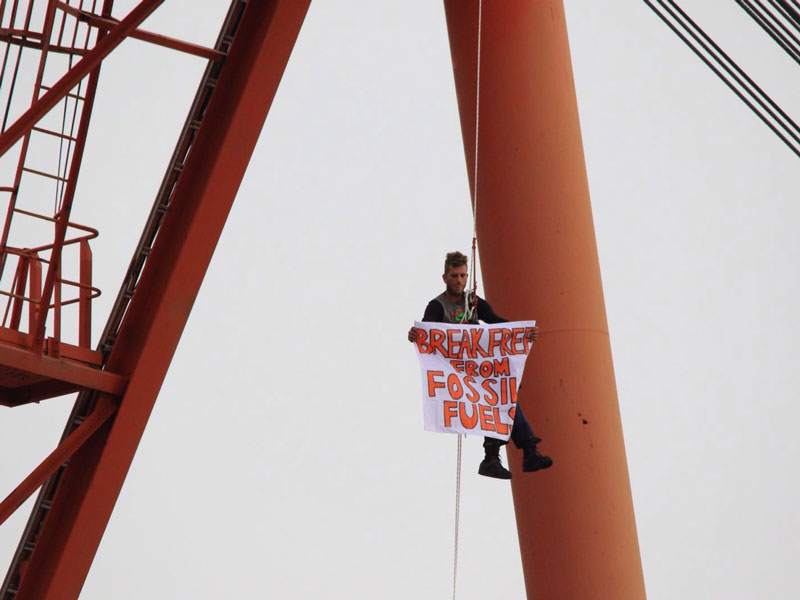 A large anti-fossil fuel protest at Newcastle in which kayaks blocked the harbour and activists occupied a rail bridge has resulted in 66 arrests.

Police estimate about 1500 protesters were in action on Sunday, with 57 of them arrested for blocking a coal rail line at Sandgate in the city’s northwest.

About 200 took to the water to impede coal ships from entering or leaving Newcastle Harbour since 11am.

A 41-year-old man who police say was hanging from a conveyor belt above a ship was charged with entering enclosed lands and destroying or damaging property.

Three women – aged 26, 27 and 22 – were charged for abseiling from Stockton Bridge at the Port Waratah coal facility.

Further charges were laid against protesters accused of attaching themselves to equipment and ships, and a woman, 25, who allegedly climbed up mooring lines of a coal carrier.

“All have been granted police bail and are due to appear in Newcastle Local Court on June 9,” police said.

A spokesman from environmental activist group 350.org said climate change was an important issue to raise as the country prepared for the July 2 election.

“On a day when the election is going to be called, it’s sending a signal to our elected leaders,” spokesman Campbell Klose told AAP.

Student Jesse Kalic was among the protesters at Sandgate and told AAP she was one of more than 50 who expected to be arrested and possibly fined.

“We are putting ourselves at risk by being here today but we feel that it’s far riskier to not take action on climate change,” she said.

Despite the arrests, the protests were mainly peaceful, Mr Klose said.